*US President Trump backs crackdown on princes, airs support for new anti-corruption initiative headed up by the crown prince. 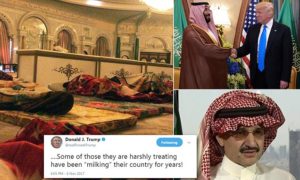 Saudi princes, ex-government ministers and businessmen are reportedly being held captive in Riyadh’s. five star hotel where they were photographed to have been humiliated sleeping on the floor. Inset downside is Prince Al-Waleed, reputably one of world’s richest man, who is worth $10 million and is one of the arrested princes. TOP: King Salman and US President Donald Trump during Trump’s visit in May.

When Donald Trump arrived in Saudi Arabia last May, the Saudis celebrated his arrival by projecting a multi-story image of his face on one of the ritziest hotels in the kingdom: the Ritz-Carlton Riyadh. Now the same five-star luxury oasis, which normally plays host to the world’s foremost leaders, has become the world’s fanciest prison.

That’s right: The Ritz-Carlton Riyadh was requisitioned over the weekend to house the princes, government ministers, and members of the military who were arrested by a new anti-corruption committee helmed by 32-year-old Crown Prince Mohammed bin Salman, whose rapid rise and consolidation of power has raised eyebrows in the kingdom and around the world. Included in the group of detainees is billionaire Prince Alwaleed bin Talal, whose net worth of about $10 billion makes him one of the world’s wealthiest men.

On Monday images and videos began to appear on Twitter of the Ritz-Carlton’s ballroom B, which appears to have been set up with floor mats and flowery blankets. A machine gun rests against one wall.

The Guardian newspaper reported that late Saturday night, the hotel’s paying guests were roused from their rooms and hustled from the restaurant. They were told to gather in the lobby with their items and were then ushered onto vehicles and whisked off to other hotels.

Meanwhile, the newly arrested princes and ministers — who are used to a level of luxury most of the world cannot imagine — were bused to the Ritz-Carlton. They may be relatively comfortable, as detainees go, but they are, as of now, denied freedom of movement. Some 30 are housed at the Ritz, the New York Times reported, but in all as many as 500 may have been arrested in the anti-corruption sweep.

The website of the Ritz-Carlton Riyadh still appears ready to take reservations, though an attempt to reserve this coming evening found no available rooms. And yet the welcome blurb now seems surreal, in light of the prisoners housed there:

Lush with 600-year-old olive trees, landscaped gardens and swaying palms, The Ritz-Carlton, Riyadh is one of those Saudi Arabia luxury hotels that completely envelopes its discerning guests in majestic surroundings and discreet, attentive service. Discover an elegant oasis where spacious suites, a world-class spa, a stunning indoor pool, lavish wedding and event spaces and exceptional dining options provide the most unforgettable memories.

The arrests have sent a ripple of anxiety through the kingdom — especially as other members of the royal family, even those not detained, have now been denied the right to leave Saudi Arabia. This is a crowd that takes pride in frequent international travel. All of that’s on hold for now.

As the New York Times reported, the Ritz’s typical weekend looks more like it did two weeks ago, when several thousand of the world’s wealthiest joined Treasury Secretary Steve Mnuchin and Steve Schwarzman, the Blackstone Group founder, in Riyadh for an event called the “Future Investment Initiative,” dubbed “Davos in the Desert.”

Meanwhile, overnight, President Trump tweeted his support for the crackdown and the new anti-corruption initiative headed up by the crown prince.

Trump said, “I have great confidence in King Salman and the Crown Prince of Saudi Arabia, they know exactly what they are doing some of those they are harshly treating have been “milking” their country for years!”