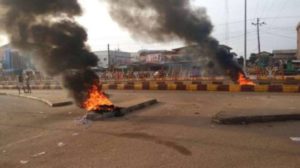 *Some of the burn fires during the protest. 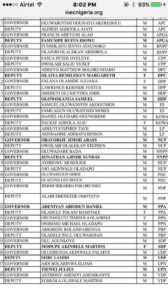 *List of Ondo Governorship Candidates and their Deputies as released by the INEC.

The riots in parts of Ondo State yesterday over what was described as substitution of the name of Mr. Eyitayo Jegede (SAN) for that of Barrister Jimoh Ibrahim as governorship candidate of People’s Democratic Party (PDP) in the next month gubernatorial election in the state by Independent National Electoral Commission (INEC) have been described as unnecessary.

More to receive knows were the comments credited to the Governor of Ondo State and leadership of PDP, particularly the statement by Ekiti State Governor Ayodele Fayose, blaming the problem of their party’s governorship candidacy on President Muhammadu Buhari and All Progressives Congress (APC).

The DEFENDER checks revealed that as early as 6.30am the rioters had barricaded all the roads leading to Akure, the state capital, chanting war songs and paralysed both economic and social activities as commercial banks and shops were closed down.  Workers and students were turned back while commercial vehicle owners deserted the streets.

The protesters did a lot of burn fire on all the major roads in the state and resisted all attempts by the security agents to disperse them. In the midst of sporadic gunshots and tear-gas by the combined team of security agents the protesting youths remained undeterred.

But some of the people that spoke to The DEFENDER on the development said against the report that security agents tried to stop the protesters, it was not true.

A legal practitioner, Barrister Jimoh Salau, said, “The protests you witnessed yesterday (Friday) is just a show of executive lawlessness.  I call on President Muhammadu Buhari and the Inspector-General of Police (IGP), Mr. Ibrahim Idris, to know that if current commissioner of police in Ondo State is not removed, the state will be put in state of anarchy.  She conspired with Governor Olusegun Mimiko to ensure the success of the protests.  That was why the hoodlums entered town signing anti-Buhari and anti-APC songs saying ‘After Iroko who is next if not Eyitayo Jegede?’ And the police watched them without stopping them.

“I want both the President and the IGP to be guided by the 1983 Ondo State crisis leading to killing of many people and destructions of properties which President Buhari incidentally came to stop as military Head of State.  They should be guided by that and arrest this situation immediately by looking into the activities of the state commissioner of police because, She has compromised her constitutional responsibility for allowing the hoodlums singing PDP, anti-Buhari and anti-APC to effectively carry out burning of tyres in the presence of police.

“There is no way you can compare what happened yesterday with what the law allows.  Their protests have escalated to something else by burning tyres, blocking the roads and attacking people who are APC members.

“Their protest is at variance with the protest envisaged by the Constitution of the Federal Republic of Nigeria,” he said.

As a result of the uprising, the Ondo State Governor, Dr. Olusegun Mimiko, on Friday morning quickly raced to the presidential villa to formally intimate President Muhmmadu Buhari on the developments in the state and, it was gathered that on getting to the villa, the governor informed the President and appealed to him to intervene in the matter at least to prevent the crisis from escalating.

Mimiko was said to have described as shocking that INEC substituted Jegede for Ibrahim’s name on the final list of various parties’ candidates, saying it was an act of gross impunity.

The governor recalled that the election, which produced Ibrahim, was conducted in Ibadan, Oyo state and was not supervised by the relevant bodies, wondering why Jegede whose election took place in Ondo with the presence of INEC and security agencies as monitors was set aside.

It will be recalled also that Ibrahim was a product of Ali Modu Sheriff factional leadership of the PDP while Jegede belonged to the Ahmed Markifi’s faction.

Speaking to State House Correspondents after his meeting with Buhari, Mimiko said the crisis in the state could assume a wider dimension if the situation was not reversed.

The response of the President to Governor Mimiko’s request was disclosed by the governor himself, who told journalists in the villa that, “Mr. President has promised to look into it and that if there is any injustice, we should be rest assured that it will be rectified.”
Although Governor Mimiko was not heard blaming President Buhari or APC for the problem concerning PDP’s candidacy in Ondo State, many have blamed him and the police for allowing PDP supporters to so paint the situation like President Buhari and APC were responsible for heating up the state.

Reacting in an interview with The DEFENDER in Akure this morning, Barrister Salau, said, “The matter came from the standpoint of the crisis between Alli Modu Sheriff and Ahmed Makarfi leadership factions within the People’s Democratic Party (PDP).  Some people took to the streets because they think they must do so being supporters of Governor Mimiko and Eyitayo Jegede knowing that their relevance would end with Mimiko’s exit without Jegede becoming the governor.  So, where is the hand of President Muhammadu Buhari or the hand of APC in that?

“Go and tell the world that Buhari has no business in the affairs of PDP.  It is a matter of law and nobody is above the law and nobody must claim to be above the law.  It is negligence of PDP that led to the problem of who their governorship candidate should be and who should not be.  The court of jurisdiction gave a ruling.  If they have any issue with that, they should show that they at least are worthy people to be trusted with the leadership of Ondo State by going back to the court, this time Court of Appeal, and seek redress.  And currently they have an appeal filed at the Court of Appeal.  Why then do they want to push Ondo to a state of chaos simply because they have a problem within their own political group?

“This is the reason I say it is executive lawlessness because the governor cannot claim not to know about why the commissioner of police allowed the protesters to successfully carry out burn fires across the state without state.

“And a report said despite sporadic shootings and tear-gassing by security people the protesters were undeterred.  I laugh.  What kind of report is that?  When security people cannot stop mere hoodlums protesting like those guys did, when it comes worse, is it then we can trust them with security of lives and properties?  This is the reason, once again, President Buhari and the IGP Ibrahim Idris must remove the commissioner of police in Ondo State for compromising her constitutional responsibility,” Barrister Jimoh Salau spoke with anger during the interview with The DEFENDER.

In the meantime, the Deji of Akure Land, Oba Aladetoyinbo Aladelusi, had appealed to rioters across the state to be guided by the law of the Federal Republic and keep to it.  In a statement last night, the paramount ruler appealed to the protesters to allow the law take its full course.

Oba Aladelusi, in the statement signed by his Chief Press Secretary Micheal Adeyeye, said, “The Akure Deji-in-Council at an emergency meeting presided over by the Deji and paramount ruler of Akureland, Oba Aladetoyinbo Ogunlade Aladelusi (Odundun II) today  (yesterday) reviewed the list of gubernatorial candidates as released by the Independent National Electoral Commission (INEC) and the attendant effect of the substitution of the name of Mr. Eyitayo Jegede (SAN) with that of Barrister Jimoh Ibrahim as the candidate of the People’s Democratic Party in the 26th November gubernatorial election in Ondo State,” and had come out to say the rioters needed to be law abiding.

Arguing that what INEC did amounted to rigging the Ondo State governorship election in advance, Ekiti State Governor Ayodele Fayosde had accused the All Progressives Congress (APC) of turning the electoral umpire into a willing tool that could be deployed at will  to manipulate election.

He said recognising someone who did not emerge through any known electoral process signaled the end of democracy in the country.

Mimiko meeting with Buhari, man he said unfit to rule, had no certificate – Jimoh Ibrahim

In his reaction to the protests, the INEC recognised PDP governorship candidate in Ondo State, Barrister Jimoh Ibrahim, said the burning of tyres allegedly orchestrated by Governor Mimiko was to give a false impression of security challenge in the state but that the trick would not work.

In a statement he issued yesterday, Ibrahim said, “Yesterday, Mimiko called on the drivers’ union in the state, whose chairman is his relative, to gather disused tyres across the state and burn them so as to show that there are security challenges in Akure town. While the tyres were burning, school children were attending their classes, banks were opened, market women and traders were carrying on their economic activities, and courts were sitting”.

According to him, “Regrettably, Mimiko’s orthodoxy has played out to be fake, empty and unbecoming of a person that occupies the position of the governor of a state. I am happy to note that Mimiko eventually met with President Muhammadu Buhari, a president that Governor Mimiko had described, in a meeting with the former President Goodluck Jonathan, as unfit to govern Nigeria and according to Governor Mimiko, the president does not have a school certificate. Regrettably, this tyre burning for sympathy will not work as Ondo State remains peaceful.”

But the state INEC Resident Electoral Commissioner (REC), Olusegun Agbaje, who addressed the protesters who came to the commissioner headquarters in Akure, explained the reason behind the removal of Jegede as the PDP candidate.

Agbaje said, “We received a court order from the High Court in Akure on Wednesday but there was a subsisting ruling by Justice Abang on Thursday and we had to comply with the order.”

“The situation will continue that way until the matter is decided by the Supreme Court if the parties choose to proceed to the apex court. We do not have any candidate but we will always abide by the laws guiding the process,” said the state REC, Agbaje.