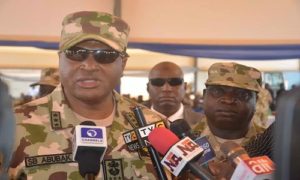 The Nigerian Chief of Air Staff, Air Marshall Sadique Abubakar, has said that the Niger Delta needs a comprehensive solution to end militancy.

He gave this hint during his visit to Port Harcourt, Rivers State capital for the commissioning of personnel blocks at the premises of the special operations group of the Nigerian Air Force.

The Air Chief decried the loss of professionalism associated with personnel living in non-military environment.

On the other hand, Mr. Abubakar told journalists that Air Force operations had become more clinical in the fight against Boko Haram, through the use of more intelligence surveillance air crafts.

This was in response to the plea of one of the 21 rescued Chibok girls who asked the force to be mindful of their of operations in order not to wipe out the other girls still in the clutches of the Boko Haram group.

He went on to say that, “There is no military operation in the world that can guarantee zero casualty when engaging a legitimate military target.

“That incident the rescued girl is talking about happened sometime in 2015 when we just had two intelligence surveillance aircraft, now we have six and we will do everything humanly possible to avoid casualties in our fight against Boko Haram,” he asserted.