The Group Managing Director/CEO of KAM Holding, Dr. Kamoru Yusuf, has described the appointment of the former Nigeria’s Finance Minister, Dr. Ngozi Okonjo-Iweala, as a member of the South Africa Economic Advisory Council as a strong testimony of reward for merit and excellence..

He also thanked President Matamela Cyril Ramaphosa of South Africa for the honour adding that the former minister’s performance will inject so many laudable achievements to the nation and  strengthen South Africa’s economic foreign policies. 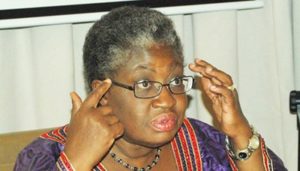 Ngozi Okonjo-Iweala: Where are your skulls? She seems to be asking “Mischief Makers”.

Dr. Yusuf in his congratulatory message signed on Sunday noted that the ex-Minister’s contributions to the growth and economic development of Nigeria during her tenure as the coordinating minister made Nigeria to stand out as a nation solvent for international trades.

He noted that, ” Okonjo-Iweala demonstrated genuine interests and love for nation-building processes as an incorruptible economic expert, thereby, putting national interest above every other interests in a bid towards ensuring that Nigeria remain the giant economy in the Africa continent.

“She left behind indelible marks which cannot be condemn by any government. She is indeed a leader worthy of emulation by all standards. It is not surprising that another economic giant in Africa has found her worthy of the appointment. This has further confirmed the fact that Mama Ngozi Okonjo-Iweala is a global citizen with unprecedented records capable of creating more widows of economic prosperity for emerging nations. ”

Dr. Yusuf however congratulates her and rejoice with Nigerians over the appointment describing it as a special honour done to the country through the former minister, “It is indeed an honour well-deserved “.
He therefore wished her a successful tenure in office stressing that “other financial experts and technocrats should emulate Dr. Okonjo-Iweala and be good ambassadors of the nation in their respective line of duties.”