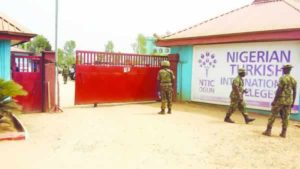 Security forces on ground at location.

The Nigeria Police Force (NPF) has further strengthened the manhunt for the kidnappers of staff and students numbering from Nigerian Tulip International Colleges (NTIC), Isheri, Ogun State, with the deployment of both the Special Intelligence Tactical Response and the Special Anti-Kidnapping teams from Force Headquarters, Abuja to Ogun and Lagos states.

The school is located at Lagos/Ogun states boundary community of Isheri necessitating the security searchlight to be beamed on the two neighbouring states.

The DEFENDER learned that the deployment of the Special Tactical Response and Special Anti-Kidnapping teams were ordered by the Inspector-General of Police (IGP), Alhaji Ibrahim Idris.

Police sources, it was learned, confirmed the special IGP’s teams were deployed with the task of coordinating efforts and working in synergy with Lagos and Ogun states Police commands to rescue the kidnap victims.

In the meantime, Police sources said the kidnappers had contacted the families of the abducted victims and demanded outrageous sums of money but declined to state the amount involved.

A family source in the home of one of the victims however disclosed that a ransom of N100 million had been demanded by the abductors.

“The kidnappers called early this morning and demanded N100m. That is what they are insisting on for now, but the family cannot raise that amount.  We are worried. We hope God will touch their heart to free all the victims. The police are also assuring us that they are on top of the situation,” a source close to the family said.

Recall The DEFENDER, being one of the first to be contacted by the school management, had reported how it broke the news, not to the public but, to the Lagos State Commissioner of Police, Mr. Fatai Owoseni, Area G Lagos Area Commander Mr. Lanre Ogunlowo and the Ogun State Police Command through the state Police Public Relations Officer (PPRO), Mr. Abimbola Oyeyemi, at about 10.50pm, about 50 minutes after the unfortunate incident occurred Friday night.

The online media had reported on Saturday how commendable the police responses came from Lagos and Ogun states’ commands.

Meanwhile, Vice Principal (Academic), Mr. Olayinka Aderoju, told The DEFENDER that the school had been closed for this week, after which a Parents’ Teachers Association (PTA) meeting will be held and the reopening will be discussed.

Aderoju, who thanked The DEFENDER media organisation for its swift action helping make contacts that saw Lagos and Ogun police swinging into quick actions, promised said it would not be in the interest of security to divulge any information at this time.

Aderoju reportedly said earlier that, “For security reasons, we cannot divulge any information about the development yet. But we are doing our part and the security operatives are doing theirs, but we cannot say anything that can jeopardise the efforts.

“But we are hopeful of their early release and freedom. For now the school is observing a break in order to identify with those abducted students and staff. We cannot continue as though things are normal. In any case, we are hopeful that very soon there will be good result for us. For now, we have not decided how long the break will be but on Saturday we will hold a PTA meeting where we will review the situation and after that we will determine what to do but before then, we are hopeful.”