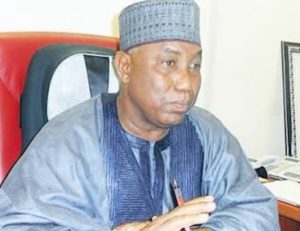 President Muhammadu Buhari has felicitated with the National Organising Secretary of the All Progressives Party, Senator Osita Izunaso, on his birthday.

In the same vein, the President also extended his congratulatory message to the newly elected Vice President of the Inter-Parliamentary Union (IPU) for Africa, Senator Kabiru Ibrahim Gaya, whose electoral success was announced at the just concluded 135th general assembly of the union in Geneva, Switzerland.

According to a statement on Osita Izunaso’s birthday anniversary signed by his Senior Special Assistant on Media and Publicity, Mallam Garba Shehu, President Buhari expressed his joy to join family, friends and well-wishers in celebrating the life of the accomplished journalist, politician and philanthropist, who he said had used his God-given abilities and resources for the benefit of humanity.

The statement said, “The President salutes the exemplary lifestyle and conduct of Senator Izunaso who at the golden age of 50 has creditably demonstrated great leadership skills with towering records as a former distinguished lawmaker and current APC chieftain.

“President Buhari believes that Senator Izunaso’s  commitment to providing care and support to  Persons Living with Disability through his Kpakpando Foundation; and the decision to celebrate his golden jubilee with the less privileged is worthy of emulation by all, particularly young and aspiring leaders.

“The President prays that the Almighty God will grant Senator Izunaso more years of good health, wisdom and diligence in the service of the nation and humanity.”

Born October 30, 1966, Osita Izunaso was, on the platform of People’s Democratic Party (PDP), elected Senator representing the Im0 West Senatorial District in Imo State, South East Nigeria in 2007 and was there until 2011 when he lost in the party’s primaries to Hope Uzodinma, who in 2011 succeeded him in the 7th Assembly as Senator.

Product of the University of Jos, Senator Izunaso, during his time in the Senate, was Chairman, Senate Committee on Gas and belonged to seven other Senate committees thereby ranking among the most powerful and experienced Senators of Igbo extractions at the time.

Osita Izunaso is today the National Organising Secretary of the ruling All Progressives Congress (APC).

In the meantime, President Muhammadu Buhari has also congratulated Senator Kabiru Ibrahim Gaya on his election as Vice President of the Inter-Parliamentary Union (IPU) for Africa at the just concluded 135th general assembly of the union in Geneva, Switzerland.

President Buhari, according to a separate statement also signed by Garba Shehu, was said to be certain believing that Senator Gaya possessed the experience, credentials and vision to serve in the international body and would therefore contribute to the goal of making the world a better place through people-oriented legislations in a democratic society.

The President, Shehu said, was confident that the distinguished Senator of the Federal Republic of Nigeria would serve the IPU with dedication and integrity, in addition to representing the collective voice of African parliamentarians on priority issues which would promote peace, security, development and prosperity in the continent.

The President assured him of the full support of the Federal Government and other well-meaning Nigerians throughout his tenure as Vice President of the Union.

Kabiru Ibrahim Gaya was born on 16 June 1952 in Gaya, Kano State.  He attended Gaya Primary School from 1961-1964 and Tsangaya Primary School where he finished his primary school in 1968 and then proceeded to the Government Secondary School Birnin Kudu from 1969-1973 where he obtained the West African School Certificate (WASC) and College of Advanced Studies from 1974-1975 where he obtained IJMB. He obtained a BSc. Architecture from Ahmadu Bello University, Zaria in 1977. He obtained Master of Science degree in Architecture from the same university in 1980 and was later as he moved on in life was recognized with an honorary doctorate degree which was awarded to him by the University Of Science And Applied Management, Port-Novo, in the Benin Republic capital.

Gaya, Governor of Kano State (1992-1993), is a member of the Nigerian Institute of Architects (NIA) and the Nigerian Large Scale Farmers Association (NLSFA) and has been in the Senate of the Federal Republic since 2007.