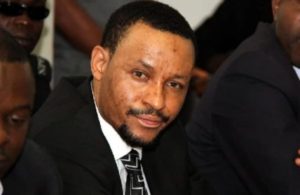 *’No chairman, no tribunal’

The Code of Conduct Tribunal (CCT) Chairman, Justice Danladi Umar, Wednesday, turned down an application by Senate President Bukola Saraki to disqualify himself (Umar) from further hearing the charges against him.

He said the allegation could not scale through because it lacked concrete evidence.

Umar, who was detailed about his reasons, held that since allegation of bias was a serious attack on integrity of a judge, such allegation must be supported by concrete evidence to succeed.

By implication, Senate President Bukola Saraki had again failed for the second time to stop the CCT chairman from continuing with his trial. Justice Umar said implied that the position of a chairman was too important to a tribunal than to be removed on frivolous, unsubstantiated allegation.

Saraki, who is facing a 16-count charge before the tribunal, had in his fresh application on his behalf by a former Attorney General of the Federation, Chief Kanu Agabi, urged Justice Umar to disqualify himself from further hearing his trial, accusing him of bias.

His lawyers contended that remarks the judge made in the open court clearly portrayed his prejudice against the defendant.

Saraki said he no longer had confidence in ability of the panel as presently constituted, to accord him fair hearing.

But the tribunal, Wednesday, dismissed the fresh application stating that such application was an abuse of judicial process being that Saraki had earlier filed a similar application which was dismissed on April 28.

In its ruling, the Justice Umar-led panel held that Saraki’s allegations were founded on “mere conjectures and alleged sensational statements that have not been verified.” It stated that that the defendant had enough avenues to ventilate his grievances against Justice Umar.

It stated that, “It is not for the defendant to ask the Chairman to disqualify himself which is tantamount to terminating further hearing of the case.

“The CCT is the only court that is constitutionally empowered to hear the charge brought against the defendant.

“The Chairman can be disqualified but such action must be based on overwhelming evidence and not by mere conjecture or a frivolous application.

“The accused persons must establish his allegation for his request to succeed.

“Allegation of bias is a very serious attack on integrity of a judge. For such allegation to succeed it must be supported by concrete evidence”‎, Justice Umar held.