The coronation ceremony for the official installation of new Olowu of Owu Kingdom, Oba Dr. Saka Adelola Matemilola, begins twenty-one days from now, precisely Sunday October 23, 2022. Ahead of this august occasion, faithful of the Lekki Muslim Community gathered Saturday October 1 in a prayer session for him.

His selection by the Owu Kingmakers was approved by the Ogun State Government of Prince Dapo Abiodun on Wednesday July 27, 2022 as the new Olowu of Owu, Abeokuta. 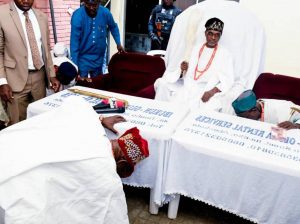 His Royal Majesty Oba Dr. Saka Adelola Matemilola, waves his royal symbol, as Balogun of Owu and former President of Nigeria, Chief Olusegun Obasanjo, along with other top Owu chiefs, prostrates before him as sign of submission to his traditional leadership of the ancient kingdom.

Dr. Saka Matemilola is second Muslim occupier of the Olowu of Owu Kingdom’s stool, in 50 years, after the demise of Oba Salami Gbadela Ajibola, who ruled between 1949 and 1972. Oba Gbadela Ajibola was father of world class judge, pioneer President of the Nigerian Bar Association (NBA), legal luminary and Proprietor of Crescent University, Abeokuta.

Although the invitation to serve on the throne appears to him like a surprise, Oba Matemilola, a devoted Muslim personality sees it as a call to service of his people in Ogun, South West and Nigeria as a whole and, as a member of Lighthouse Mosque, Lekki, in Lagos, the Lekki Muslim Community gathered together to support him with prayers and words of advice for his right guidance as he ascends the exalted throne under which former President Olusegun Obasanjo is Balogun.

Justifying the gathering together in the prayer session, the Chief Imam of Lekki Central Mosque, Imam Ridwan Jamiu, who delivered lecture at the Saturday event, said, “it is not often heard that from Sunnah perspective, you want to gather for a special prayer because prayer is something that we know everyone is meant to do individually. If you want to do it for someone, you do it individually, as well. It is more efficacious because it is more sincere when you do it alone for the person.”

However, Imam Jamiu justified holding the prayer session by citing a Hadeeth by Abdullahi Ibn Umar saying, hardly would Prophet Muhammad (peace be upon him) gather Muslims for a purpose and he would not say a prayer and he recited the prayer, adding that, “This makes the prayer session for Olowu of Owu in compliance with the Sunnah,” he said under his lecture titled, “Being an Oba and a Committed Muslim: The Challenges”.

Oba Saka Matemilola, a First Class monarch, is the 14th Olowu of Owu Kingdom, Abeokuta, Ogun State in South West Nigeria succeeding the late veteran Broadcasting Journalist that I served as a Media and Publicity Consultant (2009-2021), His Royal Majesty Oba Dr. Olusanya Adegboyega Dosunmu, Amororo II, the 13th Olowu of Owu Kingdom, who ruled for 16 years having been installed in July 2005 before he passed on Sunday December 12, 2021 after a brief illness. Late Oba Dosunmu, himself, succeeded the late Oba Adewale Adisa Odeleye, Lagbedu I, who transited to greater beyond in June 2003. 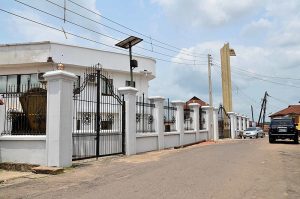 Very familiar with the immediate past Olowu Dosunmu, I can authoritatively report that he was cooperated with by the traditionalists of Owu Kingdom by not obstructing his constitutional rights as a committed Christian of the Baptist bloc while he reigned, for the 16 years he spent on the throne. My familiarity with Oluwu Dosunmu Amororo II upgraded from me being his special journalist person to a son and, so, he would at his Olusegun Obasanjo Hilltop GRA private home at Oke Mosan let me into his dining room and made me dine with him, while also making me ride, sitting by his side behind the driver, on his convoy.

The cooperation was strong that even when he expected those with occultist responsibilities to come forward for official conferment, they let him be. Kabiyesi Oba Olusanya Dosunmu used the Goodluck Jonathan Hall in the Palace premises for Christian devotion where he usually pointed to this reporter as “My son and Alhaji. He is here with us from Lagos because of love.  He is doing well for Owu Kingdom in the media and we love him.” His contribution to the Owu Church, behind the palace, was noticeably commendable.

Our checks revealed that Ogun State Chieftaincy Law forbids that any Ogboni, occultist or traditionalist practice is administered or forced on an Oba, who is not a traditionalist by religious belief but is either a Muslim or Christian. This right, the immediate past Olowu Dosunmu enjoyed to the fullest and the committed Muslim on the throne currently is expected to enjoy same.

It is further strengthened by the fact that, finally, the sitting Governor of Ogun State, Prince Dapo Abiodun on Monday January 10, 2022, signed into law, the Chieftaincy Bill Stopping the Imposition of Rituals during the Installation and Burial of an Oba. Also, the law allows a deceased Oba to be buried in accordance with his religion instead of being buried by traditionalists. The bill titled “Obas, Chiefs, Council of Obas and Traditional Council law of Ogun State, Bill 2021”, is said to be aimed at respecting human dignity and promotion of modernity in the installation and burial of traditional rulers.

With its passage, promoters of the bill believe that “fetish practices in the process of installing and burying traditional rulers will be largely curbed.” Recall that traditionalists in Ogun State have on different occasions kicked against the bill, accusing the Ogun State House of Assembly of plots to erode Yoruba customs and traditions. Defying the agitations of traditional worshippers in Ogun, Governor Abiodun signed the bill on Monday January 10 at the Ijebu-Ode residence of the Awujale and Paramount Ruler of Ijebu Land, Oba Sikirullahi Adetona, who initiated the bill in June 2020.

Speaking at the signing ceremony, Governor Abiodun said the bill was promoted by the Awujale when he was the Chairman of the Ogun State Traditional Council. Abiodun, who expressed joy over the passage of the bill, said it spells out a method of selection of Obas and chiefs, with clarity about the passage rites of Ogun monarchs.

“Of course this is without prejudice to traditional rites that is meant to be performed by the customary, but it clarifies and removes any ambiguity about the fact that the families of our Kabiyesis (monarch) now have a say in how they want our royal fathers to be buried and I think this is very laudable.”

Abiodun commended the Awujale and the lawmakers for their persistence and insistence “to ensure that we review the existing law in consonance with the constitution of the Federal Republic of Nigeria.”

“I know that they (the lawmakers) must have been under a lot of pressure but the leadership of the House stood their ground for what is right, what is just, what makes sense, for what is modern and what is in line with the constitution of the Federal Republic of Nigeria.”

Reacting, Oba Adetona appreciated Abiodun, boasting that the signing of the bill is an approval of the governor’s second term in office.

Olowu of Owu Kingdom in History

The Olowu of Owu is the Paramount Yoruba King of Owu Kingdom.  The first Olowu of Owu (son of Oduduwa’s daughter) is also one of the original kings in Yoruba Land.

The Owu Kingdom is ruled by princes selected from six ruling houses namely, Amororo, Otileta, Ayoloye, Akinjobi, Akinoso and Lagbedu. The king is assisted by appointed chiefs known as “Ogboni”s and Ologuns. The Balogun heads the chiefs and has under him Otun, Osi, Seriki, Aare Ago and Jagunna. Ogboni chiefs consists of the Akogun, Obamaja, Orunto, Oyega, Osupori and Omolasin. Olosi is the Ifa priest of the Olowu. Originally, the Owu Kingdom had three townships namely Owu, Erunmu and Apomu.  By tradition, the Olowu is selected by six kingmakers but two more chieftaincies were added to this number in 1964, those of the Balogun and the Olosi.

Ogboni tradition was not originally part of the people of Owu’s culture. It was borrowed from the Egbas after the Owus settled in Abeokuta. Hence, the reason the Owus do not have “Iledi” (Ile Ogboni), the traditional house of the Ogbonis.

In 2006, under the kingship of Oba of Owu, Oba Olusanya Adegboyega Dosunmu, Amororo II, the Owu Palace administrative process was reorganised. The Ogboni and Ologun system of chiefs were revamped, and a new Olowu-in-Council emerged. It consists of a Cabinet of seven chiefs, including: 1. The Balogun: Prime Minister of the Kingdom; 2. The Olori Igbimo: Senior Counsel to the Olowu (or King) and overseer of towns and villages where the traditional interests of Olowu exist; 3. The Olori Omoba: Chief Prince; 4. The Olori Parakoyi: Head of Commerce and Industry; 5. The Balogun Apomu: The Commander of the Warriors of Apomu; 6. The Oluroko, Oba of Erunmu, (or, where there is no incumbent, a clan chief or elder (Ogboni) from any of the 17 other clans/families in Owu Erunmu: The Representative of Erunmu; and The Iyalode: The Chief of the Women.

Past and Present Olowu of Owu Kingdom (Owu Kings)