*They were bandits killed by military – Media report

*It’s a lie, they were our members charged N27m by Benue Livestock Guards for seized cows, still killed despite payment – Ardo

*We need to get full reports from our field commanders before any statement, Defence Hqtrs tells The DEFENDER

There has been fear that a reprisal attack may erupt in Benue State as Fulani communities in Nasarawa and Benue states claim their members have been unjustly killed by Bene State Livestock Guards enforcing the Samuel Ortom-led Administration’s anti-open grazing law in the state.

Our investigations revealed that some residents numbering 42 were killed as they arrived to collect their cows seized by the government guards after paying the N27 million charged before they could have them released to them.

“Wadata is a riverside settlement in Makurdi, housing people of Hausa/Fulani origin. Our correspondent gathered that at the early hours of Wednesday, some suspected bandits, numbering 42, were killed in an air strike operation in Nasarawa area bordering Benue and when the relatives brought home the bodies of the deceased, the community were enraged and began to mobilize for protest,” the newspaper reported on its website on Wednesday January 25.

The claim suggesting those killed as bandits was, however, punctured by the fact that there are reasonable people among them professionals and community leaders, who vouchsafed for them to say they were norman law abiding citizens, who died for simply being who they were. 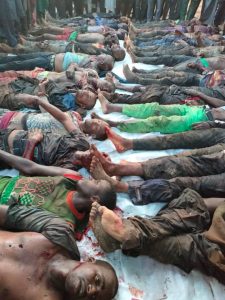 Bodies of victims of Nasarawa, Benue boundary community attacks as sent to The DEFENDER on Wednesday January 25, 2023.

This was as the newspaper reported further to say, “Our source said it took the intervention of some security operatives to bring calm back to the area. A relative of one of the deceased Bello Abdulsalam (a lawyer) told newsmen on phone that he lost a cousin in the perceived military attack.”

According to the lawyer, his cousin had gone to a settlement called Dakolo behind NASME barracks to retrieve his cattle that were seized by Livestock Guards when the incident happened.

He said, “The incident happened Tuesday night at about 8:30 pm at Dakolo settlement behind NASME. He had gone to carry his cows and It was while they were offloading them that fighter jet came and dropped bomb on them killing 42 of them one of them was my cousin brother his name is Jaallat Danbata.”

He expressed pains and called on security agencies to look into the matter and give them justice.

Also speaking, the Secretary of Miyeitti Allah Cattle Breeders Association (MACBAN), Ibrahim Galma, also reportedly claimed that some of their members were killed by military when they had gone to offload their seized cattle retrieved from the state livestock guards.

But in a swift reaction, the military had denied killing herders saying those that were killed in the operation on Tuesday night were terrorists.

A military source who spoke on condition to remain anonymous, said the operation was at the orders of Chief of Defense Staff, General Lucky Irabo who responded to series of correspondence from the Nasarawa State Governor, Abdullahi Sule, over the influx and regrouping of terrorists in the state, the newspaper report said.

“Following increasing killings, kidnappings and terrorism by the Darul Salam Boko Haram elements running away from troops onslaught in the Northeast and Northwest parts of the country, a combined team of security agencies conducted operations into the heart of the terrorists enclaves in Nasarawa State on 24 January 2023 where they were observed from the air to be gathering for a meeting and possible attack,” he said.

The military source further said that the combined security operations were initiated around 30 December 2022 following the unwarranted attacks by the elements in Kadarko axis and the kidnapping of six primary school children in Doma all of Nasarawa State on 19 January 2023.

The source further explained that the terrorists had recently destroyed the wooden bridge over a stream leading to their hideouts in one of their forests to prevent troops from reaching their locations easily while they were digging military-like trenches to take cover.

The media source quoted a retired Army officer, Lt. Col. Paul Hemba, connected to military operations against terrorists in Nasarawa State to have denied any military action taking place on the boundary community where the 42 legitimate cows owners were killed.

Lt. Col. Paul Hemba (Rtd), the report quoted, saying, “I heard about operation carried out in Nasarawa state by the military but some people from the state were said to have been killed.

He said “there was no attacks between the boundaries of Benue and Nasarawa state. No herders were killed. I also heard about the planned protest but no such killings happened in Benue state.”

When sent a message Wednesday night with a view to getting clarifications and truth of the development, the Director of Defence Information (DDI), Defence Headquarters, Brigadier General Tukur Ismail Gusau, told The that “We need to get full report from our field commanders before any statement.”

In the time, Fulani leaders among them Ardos across states of Nigeria are already expressing their anger over what separately but collective called “senseless killing of our members that has now gotten to stop”.

They want Federal Government to take action by investigating with a view to knowing the truth and doing the needful, saying as usual the media conspiracy is at work as they keep their usual silence now because these victims are Fulani.

One of them who spoke to The DEFENDER Wednesday night said, “It is not possible that we the Fulani people will see evil and support it. No. That is why we have been saying that even we the cattle herders are victims of terrorism a s banditry. But in Benue State, Governor Ortom in the name of enforcing anti-open grazing would use his livestock guards to swindle our members.

“This time now, you charged them N27 million before you could release their cows you seized to them. They paid you, you asked them to come and collect their cows and upon coming, you open fire at them and that was boundary town between Nasarawa and Benue, not even in the soil of Benue. Justice must be done immediately, he said.