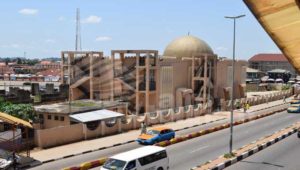 Of all the religious obligations of a Muslim, the most important is Prayer of Salat. It is compulsory for all Muslims, men and women equally. The Holy Quran states:

“Observe Prayer in the prescribed form. It is enjoined on the believers to be performed at its appointed times.” (4:104)

All the compulsory Prayers should be performed in congregation if possible. On Friday, however, a special mid-day Prayer Service is held in place of Zuhr Prayer. This is called Jum’a Prayer. Of all the Prayers, none is so essential to be offered in congretation as the Jum’a Prayer. The Jum’a, in fact, is the greatest Muslim festival.

Muslims are asked to leave all their worldly pursuits when they are called tothe Friday Prayer, and assemble in mosque to offer this Prayer with due observence of all its requirements. The Holy Quran states:

O ye who believe, when the call is made for Prayer on Friday, hasten to the rememberance of God and leave off all business, that is better for you, if you only knew. (62:10)

The Holy Prophet (peace be upon him) said:

“Your best day is Friday, so you should be diligent on that day in calling down blessings on me, for your blessings are conveyed to me.” (Sunan Abu Daud)

In regards to the preparation for Friday Prayer Service, the Holy Prophet (peace be upon him) said:

“A Muslim takes a bath on a Friday, makes himself thoroghly clean, and uses scented oil or just some perfume. Having thus freshened up, he goes to the mosque. He occupies a place without disturbing people sitting on his right and left. He offers the prescribed prayers, and when the Imam appears, he listens to him in silence. May God forgive his sins between that Friday and the last.” (Bukhari)

Abu Hurairah, may Allah be pleased with him, relates that concerning Friday the Holy Prophet, peace be upon him, said:

“There is on that day a brief period of time during the service when whatever supplication a Muslim servant of Allah makes is granted.” He indicated with his hand that the period is very short. (Muslim)

Abu Said Khudri, may Allah be pleased with him, relates that hte Holy Prophet, peace be upon him, said:

“Bath on Friday is obligatory on every adult Muslim.” (Muslim)

Ammar bin Yasir, may Allah be pleased with him, relates that he heard the Holy Prophet, peace be upon him, say:

“The length of a person’s Prayer and the brevity of his sermon testify to his intelligence. Make your Prayer long and your sermon
short.” (Muslim)