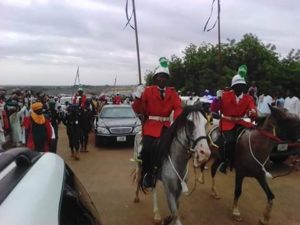 Led by horse riders and surrounded by his people, Sultan of Sokoto and Sarikin Musulumi of Nigeria departing from the over 20 acres Kofar Rimi Eid Ground, where the Mutawalle of Sokoto State and Mutawallen Sokoto and thousands of Muslim faithful worshiped with him during the Eid el-Fitri celebration last Sunday June 25, 2017.

The idea is that, even a leader can go wrong as no one except Allah is perfect, but follower must device a means of respect and politeness filled with fear of Allah in putting things through to the leadership who must in turn listen to those observations. Agitations in a nutshell blow nobody any good. That is clearly demonstrated by Sokoto people who would never be unruly towards their leader and would never show the I-dont-care attitude as the Sultan walks or drives past.

The DEFENDER, among very many other Nigerian recognized media, was part of coverage of this year’s celebration of Eid el-Fitri by the Sultan of Sokoto and President General, Nigerian Supreme Council for Islamic Affairs (NSCIA), His Eminence Alhaji Muhammad Sa’ad Abubakar III, mni, CFR.  With this special assignment it looks forward to warming itself into the hearts of very many important monarchs and religious leaders in Nigeria in the years ahead being that the two major communities (traditional and religious institutions) led by them hold the keys to ensuring true peaceful co-existence and national security in particularly Nigerian society and the media organization, just clocking its one year of ceaseless patriotic effort in the online media arena, being an effort in the direction of “defending the truth and national integrity” finds them as best places to go in partnering with managers of the nation for development.

Among those monarchs and religious leaders is His Eminence Alhaji Muhammad Sa’ad Abubakar III, who is singularly the only Nigerian monarch with dual-responsibility of leading the nation’s traditional and religious communities both going concurrently without one hitching the other.

He is Sultan of Sokoto and President General of the Nigerian Supreme Council for Islamic Affairs (NSCIA) by virtue of which offices he presides over the affairs of the Seat of the Caliphate where the watch word is “peace” and nothing more, and oversees the affairs of the Nigerian Muslim Community to the extent that even the sitting Governor of Rivers State, a Christian, Barrister Nyesom Wike had to pay him Sallah homage on Tuesday third day after this year’s Eid el-Fitri celebration, all the way from Port Harcourt and declared “Sultan is father to all Nigerians”.

The DEFENDER found out that celebration of Eid el-Fitri by Sultan and other Sokoto resident is not just for the fun of it but filled with the lessons that come with it from the very commencement of the Ramadan fast to the celebration day and that became apparent in the way the Africa’s fourth most influential monarch and world’s number 17 most influential Muslim leader – loved all over Nigeria – as bridge builder celebrated the just concluded Sallah with his people at home.

It was the first time this young media organization would be the guest of the 60-year-old monarch and so the first time it, like some others, would be hosted for four days by a king that is the most revered by any standard in the Nigerian traditional and religious communities. It was also the first time any Sallah would be celebrated by the media outfit outside its base. And it was memorable in all ramifications as it came with all the glamours full of moral, spiritual take-away, very highly educating, entertaining and filled with elements of warning for self-sensoring.

Celebrating this last Sallah with Sultan was educating because it taught many things about Sokoto people, their self contentment and spirit of love as well as their accommodation of others. It was because of the visit that this media outfit was able to see how Christians were hosted to breaking of fasts (Iftar) that they – although they did not actually fast – with their fellow brothers and sisters in Islam.

Recall the Sultan had been away in Umrah. He returned to Abuja when Nigeria’s Seat of Power was in dire need of his role in resolving the escalated ethnic angers that the Igbo IPOB and MASSOB’s hate and inflammatory speeches had caused thereby creating tension due to a quit notice issued by Arewa Youths to Igbo of the North to leave their region and go back home to enable them have their Biafra. The quit notice by Arewa Youths was the most striking to anybody in Nigeria including both the government and even the Igbo who had seen Nigeria as nothing more than a Zoo that must not be respected. Any serious government leader must act so Acting President Yemi Osinbajo did it well. And Sultan was, with due respect, brought into the Rock of Power, who led other Northern monarchs first to an Iftar, breaking of fast with the Acting President and the following day to an intensive consultative meeting with at the instance of the man holding sway in the absence of the President and Commander-in-Chief of the Federal Republic of Nigeria, Muhammadu Buhari.

Recall also that the moment he returned home in Sokoto from Abuja, Alhaji Abubakar III’s first major assignment was to host Igbo, Yoruba communities and their hosts (the Sokoto people) to an Iftar, where he addressed the mindset of all: Igbo, Yoruba and Hausa telling them that since there was no other country any citizen of the country could call his or her own, nobody should engage in activity capable of making Nigeria difficult to live.

During the four-day visit to his Sultanate by this reporter, it was also learned that the Sultan feels more comfortable eating with people. The vital aspect of that is that he does not discriminate as the young pen-man guest could vividly see for himself the downtrodden, the middle class and upper class eating with him and that continued for as long as his stay in Sokoto lasted. Then comes the host to Iftar,  breaking of fast, of Muslims and Christians by wife of the governor of Sokoto State, Hajia Maryam Mero Tambuwal, and it went on like that to the inner Geri (township) where people that ordinarily would be called poor in other parts of Nigeria, because of their self-contentment, competed to lead one another in feeding others. A christian security man in the town told this reporter that all the kindness being so displayed was not just in Ramadan but always. That was the educating aspect of the media trip.

It was also highly entertaining as it really put the Sultan up as a leader not only loved from outside but is truly and practically good and loved at home by his own people. This has in actual fact altered the parlance that ‘prophets are not loved in their own countries’. Yoruba also have their own version: ‘the hunter is not respected by domestic animal’. In the case of Sultan, not only that he is loved at home in the North particularly Sokoto but also, all other Emirs of Northern Nigeria take a cue from him and will be so meticulous in ensuring that they are not too forward before him. Yet, he is the simplest of all Northern Emirs.

At exactly 7am on the fateful Sunday that was Sallah day, preparation for Eid had commenced. Vehicles on to be on the convoy of the Sultan had positioned and this reporter was put in one to go third to the three-seater Mercedes Benz that would convey the Sariki Musulumi of Nigeria to Eid Ground. At 8am the movement had started and surprisingly the car conveying the Sultan with plate number ‘SULTAN’ was surrounded by horse-riders well kitted in red like the royal guards in the Palace of the Queen of England and two others led him as sirens blasted through Sultan Abubakar Road to the about 20-acre Kofar Rimi Eid Ground in the Sokoto metropolis. The Kofar Rimi Eid Ground was said to be the biggest of such praying ground in Sokoto State and it was filled to the extent that this reporter had to pray on his feet resting on his Niyah, intention, as the whole of the space was filled with Muslim faithful estimated to be up to a million.

They all watched with keen interest the different and colourful displays by the happy people. Flutists did their own thing and drummers were not left behind as village and district heads individually led their respective contingents on horse rides as they filed past waving to the Sariki who at each passing returned their compliments by raising his right. There was also the traditional gun shots parade and many others. Health workers were also on parade as they filed past in front of the Sultan in their ambulances with full blast of sirens. More happened. After the parade the Sultan gave his address in Hausa and Eid el-Fitri celebration for the year on the aspect of the Arcade ended.

The Sultan then moved into the main auditorium where dignitaries are received to receive the state governor, Tambuwal, who was at the Palace to pay him Sallah homage. After the homage they moved into the council chambers where refreshment was done on serve-yourself basis. From there Alhaji Abubakar III saw off his guest, the governor, followed immediately by family meeting where the Sariki had time out to also take care of his own blood relations.

The warning aspect of the media trip is the fact that whoever is in position of authority should watch it because he will be held accountable for how he discharged his responsibility to his people. That was keen to the Sultan, a retired Brigadier General of the Nigerian Army, in the way he behaves so much that Secretary-General, Astro-Qiblah Initiative, Mallam Ja’afar Abubakar, an Ahmadu Bello University lecturer, Mallam Salihu Muhammad and Mallam Usman Mahmud, trio of National Moonsighting Committee, who also visited from Abuja and Kaduna, were forced to ask this reporter: “Have you seen a king in Nigeria who is so free with everybody like this Sultan?”

The warning was not one sided. It was that even follower too will be held accountable for all his actions and inactions with regard to his behaviour particular on the aspect of obedience and disobedience to leadership. The idea is that, even a leader can go wrong as no one except Allah is perfect, but follower must device a means of respect and politeness filled with fear of Allah in putting things through to the leadership who must in turn listen to those observations. Agitations in a nutshell blow nobody any good. That is clearly demonstrated by Sokoto people who would never be unruly towards their leader and would never show the I-dont-care attitude as the Sultan walks or drives past them at their various points of activities.

If it works for Sokoto it can work for Nigeria!