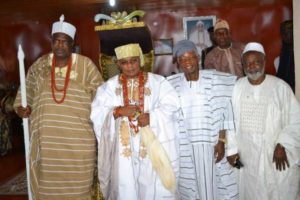 The Osun State Muslim Community will, on February 12, 2017, host a grand reception in honour of the Deputy President-General (South) of the Nigerian Supreme Council for Islamic Affairs (NSCIA), Alhaji Sakariya Olayiwola Babalola (OON).

The event themed, ‘Prayer for our Nation for Peace, Security, Stability and Development”, is expected, to be graced by the Sultan of Sokoto and President-General, Nigerian Supreme Council for Islamic Affairs (NSCIA), His Eminence Alhaji Muhammad Sa’ad Abubakar III, will be chaired by former Inspector-General of Police (IGP), Alhaji Musliu Smith.

Governor of Osun State, Ogbeni Rauf Aregbesola and other prominent citizens from across Nigeria are expected to also grace the occasion in honour of the business magnate, Babalola, who is also the President of the Muslim Ummah of South West Nigeria (MUSWEN).

Venue of the event is the Osun State Muslim Community Secretariat, Surulere Estate West Bye Pass, in the Ring Road area of the state capital.