‘As if colonialism wasn’t bad’: African tweeps bemoaned why their presidents travelled to Queen Elizabeth’s funeral in a bus, unlike Biden. Tweeps are questioning why US President Joe Biden travelled to Queen Elizabeth II’s state funeral service in an armoured car and not a bus like other presidents.
Image via HANNAH MCKAY, AFP/Twitter

Queen Elizabeth II’s state funeral on Monday 19 September attracted distinguished guests from around the world, including presidents, such as Joe Biden from the United States (US).

The world leaders joined members of the British Royal Family to pay their last respects to the late British monarch at Westminster Abbey in London earlier today.

But one detail of the procession did not sit well with Twitter users. Why was Biden exempt from travelling in a bus like fellow funeral-goers?

Why did Biden get ‘special’ treatment?

While hundreds of presidents, prime ministers and official delegates from around the world made their way to the church via a fleet of coach buses, one leader was visibly exempt.

US leader Biden and his wife, Jill, travelled to Queen Elizabeth’s funeral service via an armoured presidential limousine nicknamed “The Beast”.

According to the UK’s Express, the White House demanded that Biden travel via a six-car motorcade for “security reasons”. Their request was granted by UK officials and the vehicle was flown to the UK.

The rest of the guests were transported in buses to “ease traffic congestion”, claims the publication.

According to 9News, “The Beast” — manufactured by General Motors — is bullet-proof and is can resist gas attacks. The vehicle is also equipped with packs of President Biden’s blood type in case of a medical emergency.

But it wasn’t just Biden who was excluded from the VIP bus brigade. Others included the royal families from European countries.

Also on the list were leaders of G7 countries, like France’s Emmanuel Macron, Japanese Emperor Naruhito, and Canada’s Justin Trudeau among others. This, also for “security reasons”.

Tweeps are not impressed

But despite the reasoning behind Biden and other safety-compromised leaders, tweeps questioned why some presidents were not offered the same treatment.

Others shared pics of a group of African leaders seated together in a bus, suggesting the “segregation” was racially motivated.

According to Twitter account African Fact Zone, former Kenyan Governor, Mike Sonko also took offence to the narrative being shared on social media. He reportedly responded saying, “These foreigners lack manners. How can they keep African Presidents on one bus in London? God forbid something bad happens on that bus. What will happen?”

Here’s what tweeps had to say:

@athousandbrains: “As if colonialism wasn’t enough, African leaders are packed in a bus to the burial of the chief colonizer. Whereas the US president is given first-class treat befitting a head of state”.

@ShehuSani: “President Biden can attend the Queen’s funeral in the Beast and other World leaders will be herded in a bus. What I know is that if President Mugabe was alive, he will never agree to attend the event”.

@fj_nemo1: “They really put our African leaders in a grey house (sic) bus to go to see the Queen’s rotting corpse. Hopped on a private jet a president and hopped off an immigrate.

@BrianGeorgeKE: “African presidents ride in a bus, clearly quite an unfamiliar way of life for them”. 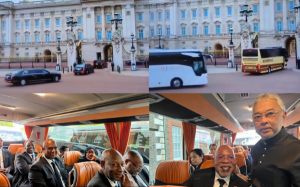 Top Left: Convoy of US President Joe Biden driving into the Burkingham Palace during Queen Elizabeth II’s funeral, Top Right: A bus transporting leaders of other sovereign presidents into the same palace after being denied rights to use their convoy. Bottom Left and Right: Faces of some of the world leaders lumped in buses during the funeral on Monday September 19, 2022.

More details can also be sourced from The South African: https://www.thesouthafrican.com/lifestyle/breaking-queen-elizabeth-funeral-president-bus-joe-biden-beast-african-leaders-latest-news-19-september-2022/