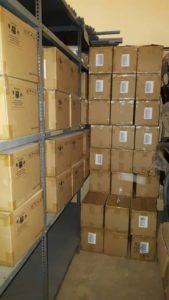 The Tablets in store

* ‘Abubakar Khadija, student: I can read soft copy of my lectures from Tab anywhere’

The Students’ Union President observed that just as the Student Union body had insisted, the University management commenced the distribution of the Tabs with students that did not receive theirs the previous year, adding that “the Union has been monitoring the distribution of the PC Tablets and I can say that the students are satisfied and happy.”

In keeping with its avowed commitment to the provision of effective teaching and learning aids, the University of Ilorin last Wednesday (January 11, 2017) commenced the distribution of outstanding PC Tablets to concerned students of the institution.

This followed a management committee meeting with student leaders and other stakeholders during which a time-table was fashioned out for the distribution exercise.

It would be recalled that in an interview granted The DEFENDER on December 21, 2016 by the Vice Chancellor of the University of Ilorin, Prof. AbdulGaniyu Ambali, and published on Saturday December 31, 2016 titled, “Our selling point that makes us Nigeria’s most subscribed university,” the don had made a commitment that by first week of January the PC Tablets, which was the major reason for the media visit, would be available.

The VC had said, “We just passed the document through council yesterday (December 20).  The council just approved the new price and from what I have learned, by the first week of January, everything will be here for the present fresh students to collect,” adding that the delay in making the tablets available was “not deliberate.”

The Vice-Chancellor, who is also the Chairman of the Association of West African Universities (AWAU), Prof. AbdulGaniyu Ambali (OON), had on a separate occasion shortly before the Christmas and New Year break promised that the PC Tablets distribution would commence unfailingly in the second week of the New Year, adding that the delay in distributing the PC Tablets to students admitted during the 2015/2016 academic session was due to the inability of the contractor to supply the consignment on schedule as a result of foreign exchange challenges.

This reality on ground is however at variance with an online media (not The DEFENDER) report titled, “ASUU Petition: Unilorin commences distribution of PC Tablets.”

A source in the university community complained to The DEFENDER, saying it was not possible that ASUU’s petition that had since been described by former and incumbent vice chancellors of the university as effort by some “49 liars” would be the reason for the commencement of the tablets distribution.

“You can confirm that yourself from your own report last year where it was clearly stated that far before your visit to the University of Ilorin on December 21, 2016 the VC and his management team had made frantic effort to resolve the tablets distribution issue. Whoever is trying to achieve anything from that other report thinking it will affect the many achievements and destabilise the progresses being made by this university can only earn disgrace.  Because it won’t fly and that is a fact,” the source said.

Meanwhile, Students of the Faculty of Law were the first to receive their PC tablets last Wednesday January 11.

Commenting on the distribution process last Wednesday, The DEFENDER gathered, the President of University of Ilorin Students’ Union, Comrade Shobowale Lukman Olawale, commended the process, which he described as “satisfactory.”

The Students’ Union President observed that just as the Student Union body had insisted, the University management commenced the distribution of the Tabs with students that did not receive theirs the previous year, adding that “the Union has been monitoring the distribution of the PC Tablets and I can say that the students are satisfied and happy.”

In his remarks, the Deputy Vice-Chancellor (Management Services), Prof. A. Y. AbdulKareem, who personally monitored the distribution exercise, noted that the University was committed to providing any facility that would aid teaching and learning and that it would not relent in continuing to do so.

Prof. Abdulkareem pointed out that “the University is one of the first, if not the very first, to engage in this type of exercise and that is why we are so committed to ensuring that every beneficiary is given what is required.”

The DVC further noted that those who had been saddled with the responsibility of distributing the facilities were on their toes to ensure that beneficiaries were given according to the timetable that had been designed for the distribution.

He said, “I have been moving around with the Student Union leadership to see how things are moving and we are impressed about it.”

On his part, the Director of Academic Planning, Prof. Abayomi Omotesho, who is the Chairman of the PC Tablet Distribution Committee, disclosed that the distribution exercise would be ongoing till February 10, 2017, stating that the naira-dollar exchange rate, which caused the delay in distributing the PC Tablets to the students, had been resolved and thus, all the students would get their Tabs as scheduled.

The Faculty Officer of Law, Mrs Funmilayo Ishola, disclosed that the distribution commenced as scheduled, adding that “163 students out of 169 have collected their Tabs this morning (Wednesday January 11).”

Some of the ecstatic students shared their joy over the distribution. Badeji Mayowa Isreal, of the Faculty of Social Sciences said, “The Tab has been given to us and is in good condition.”

Similarly, Abubakar Khadija of the Department of Agriculture said, “I am happy with the Tab I just received and I thank God and also the University authority because I can now collect and read the soft copy of my lectures from the Tab anywhere I am.”