President Muhammadu Buhari on Tuesday inaugurated the first phase of the Lagos Blue Rail Line, taking a ride from the Marina Station to National Theatre Station. 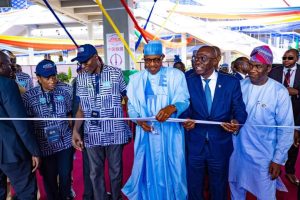 The President was aboard the trip with Lagos State Governor, Babajide Sanwo-Olu, Deputy Governor of the State, Dr Obafemi Hamzat, members of the Federal and State Executive Councils, members of the Federal and State Legislative Assemblies, President of China Civil Engineering Construction Company (CCECC), Chen Sichang and journalists, among others. 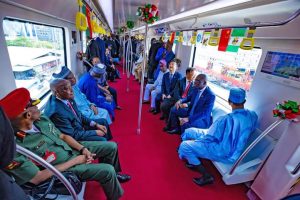 The first phase of the project, executed by the State Government, which spans 13 kilometers, has five stations – Mile 2, Suru-Alaba, Orile Iganmu, National Theatre and Marina.

In his remarks, Governor Sanwo-Olu thanked the President for the State Visit to commission several landmark projects, noting that since 1999 the State has not enjoyed this level of support from the Federal Government.

On the benefits of the project, the Governor stated that it would reduce travel time, improve the quality of life of citizens and make Lagos one of the most resilient mega-cities in Africa that would compete favorably with other megacities around the world.

Sanwo-Olu hinted that he would invite the President again to Lagos to commission the Red Line, which he described as a bigger rail corridor project compared with the Blue Rail Line.