*As Buhari condoles Thai people over death of monarch 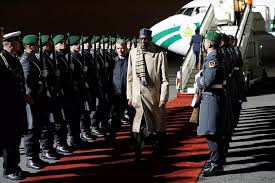 *Reacts to wife, Aisha, BBC interview on governance in Nigeria

President Muhammadu Buhari has expressed optimism on the release of more of the abducted Chibok girls, after 21 of them were freed by Boko Haram, Thursday, following more than two years in captivity.

Speaking at a joint press conference with the German Chancellor Angela Merkel on Friday in Berlin, President Buhari said negotiations will continue until all the girls secure their freedom.

The President, who is currently in the German capital of Berlin for talks with German Chancellor and President, had on a separate occasions commiserated with the good people of Thailand on the death of their monarch, His Majesty, King Bhumibol Adulyadej.

He did that just as he had also taken time out to congratulate Antonio Guterres on his appointment by the United Nations General Assembly as the next UN Secretary General, beginning from January 1, 2017.

The President, according to different statements signed by his Senior Special Assistant (Media and Publicity), Mallam Garba Shehu, has been speaking on several issues since he began his official visit in Germany on Thursday.

The President, who may have scored a very high point in all ramifications of politics and governance by a release, Thursday, of 21 Chibok girls after two years in captivity by Boko Haram insurgents, said, “On the Chibok girls, we have been able to secure the release of 21 of them, so over 100 more are still in the hands of the terrorists somewhere in the Lake Chad Basin area which include Cameroon, Niger and Nigeria.

“In getting these 21 out, we hope we will get enough intelligence to go about securing the rest of them.  We are very grateful to the UN for their participation in trying to secure the release of these girls,” he said.

Buhari is in Germany for talks on security and humanitarian issues regarding the Internally Displaced People (IDPs) in the North East, hence, he said during the joint press conference with his host, German Chancellor Angela Merkel took a retrospective look at the Boko Haram situation in the country which his administration inherited from the immediate past government and which, according to him had, claimed the lives of quite a shocking number of innocent people and rendered million people homeless in the Northern part of Nigeria.

He said, “Please don’t forget that as a result of terrorism in Nigeria, no fewer than 37,000 Nigerians were killed by Boko Haram.  Right now we have about two million people in IDP camps, 60 per cent of them are women and children and 60 per cent of those children are orphaned.

“This is a major challenge for government; we have to provide face infrastructure especially for education and health, take them back to their villages and towns and reintegrate them so that they can have normal life,’’ he said.

The President thanked the German government for their humanitarian assistance and support for Nigeria in dealing with the effects of terrorism.

Responding to a question on the BBC interview with his wife, Mrs Aisha Muhammadu Buhari, the President said his wife and the opposition needed to appreciate the depth of the problems he met on the ground.

He caused laughter at the press conference when he jokingly said: “I claim superior knowledge compared to her and the opposition,’’ referring to his three attempts at the polls to become President of Nigeria over a 12-year period, succeeding in the fourth attempt.”

President Buhari, according a Garba Shehu’s statement, sent to The DEFENDER, believes that Guterres’ wealth of experience as a former Prime Minister of Portugal, head of UN Refugee Agency for several years, diplomat and a politician of repute, eminently prepared and qualified him for the new position to be the next Secretary General of the United Nations.

As a committed member of the United Nations, President Buhari averred that, Nigeria looked forward to working and supporting Guterres to address the world’s most pressing challenges – from defeating terrorism and violent extremism for a peaceful and prosperous future to reducing poverty and tackling the devastating effects of climate change; as well as confronting the root causes of migrants and refugee crisis.

The statement reflected that the President strongly believed that for the UN to remain relevant in the 21st century, the new UN Secretary-General must redouble efforts and spearhead essential reforms of the world body to enable it effectively address current global challenges.

President Buhari also congratulated the outgoing UN Secretary-General Ban Ki-Moon on his successful tenure and dedicated service to humanity, noting that the world indeed owed a debt of gratitude to the outgoing Secretary-General for spearheading the Sustainable Development Goals and achieving the historic Paris Agreement on Climate Change, among other laudable achievements.

President Buhari acknowledged the roles played by the UN and its agencies in strengthening democracy, good governance and stability in Nigeria, under the leadership of Ban Ki-Moon wishing the outgoing well and extending his goodwill to the new.

In the meantime, President Buhari, in another statement also Garba Shehu, extended heartfelt condolences to the entire royal family, the government and people of Thailand on the death of His Majesty, King Bhumibol Adulyadej.

“On behalf of the government and people of the Federal Republic of Nigeria, President Buhari extols His majesty’s extraordinary and committed leadership to his people over a period of seven decades; and his exceptional stewardship which saw Thailand emerge as one of South East Asia’s leading economies,” the statement said.