Oba Edward Adewole, the Osolo of Isolo, Akure South, concluded his address by assuring Governor Akeredolu of the continued support of his royal leadership and that of the Isolo people, noting that “our appreciation will be limitless after receiving our Staff of Office”.

He was accompanied on the visit by his Osolo-in-Council and other stakeholders in the ancient town during the visit that saw Governor Akeredolu, supported by his siblings, the Ondo State Deputy Governor, Sir Lucky Orimisan Aiyeditiwa, the Secretary to the State Government (SSG), Princess Catherine Oludunni Odu, some members of the state executive council and other top government functionaries, personally receiving the Isolo monarch, who had come to physically commiserate with him on the death of his mother, Lady Evangelist Grace Bosede Akeredolu JP. 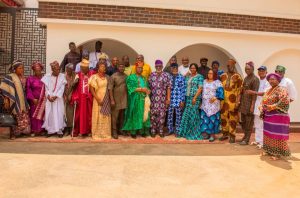 The DEFENDER recalls that Osolo Adewole had, upon announcement of Mama’s demise recently, issued a statement he personally signed joining the Governor Oluwarotimi Akeredolu, who can now be called an Omo Olooku, in mourning the woman, who died as First Mother.

In a statement issued at the Palace in Isolo copy of which sent to this newspaper Friday evening, the Aide to the Osolo on Administrative and Media Affairs, Comrade Ayomide Michael, said Oba Adewole told the governor that visit represents the heartfelt condolences of the entire people of Isolo town.

Addressing the governor, Osolo Adewole said his visit to Mr Governor represented the entire Isolo people, both home and in the Diaspora.

Oba Edward Adewole said, “Your Excellency, my visit with my chiefs and major stakeholders in Isolo town is to celebrate the life of a great mother who had blessed Ondo State with an impactful governor.”

Osalade II added that “there is no doubt that Mama is resting in the bosom of God Almighty.” 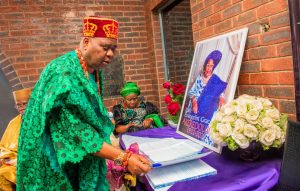 Employing the use of a Yoruba proverb saying, “Ti a ba seni loore, ope la n du“, meaning that “It is worthy to appreciate a good deed”, seized the opportunity afforded him by the visit to thank Governor Akeredolu for taking the Isolo town out of the woods with regards to permanent solution he gave with the Ajama Panel Report implementation, which resolved its age long predicament in the hands of some “powerful individuals” blocking the fulfilment of its destiny.

“Oba Adewole on behalf of the Isolo town appreciates Governor Akeredolu for liberating Isolo from age long slavery which requires only the person with God’s heart, courage, principle and vision for progressivism, thereby refers to the governor as “Abraham Lincoln of our time” by giving Government recognition to the throne of Osolo as substantial Oba in Akure South,” the statement said.

To the apparent admiration of the governor and his team, the Isolo chiefs and others on the Osolo’s entourage, who could not hold back their show of happiness, gave three ‘Gbosa’ complimenting the Osolo’s statement in appreciation of the Governor during the meeting.

Oba Edward Adewole, the Osolo of Isolo, Akure South, concluded his address by assuring Governor Akeredolu of the continued support of his traditional leadership and that of the Isolo people, noting that “our appreciation will be limitless after receiving our Staff of Office”.

Responding to Oba Adewole, an apparently encouraged Governor Akeredolu appreciated the Kabiyesi for coming with his chiefs and prominent stakeholders of his town, at the period of his mother’s passage.

The Governor stressed that he his administration does the needful with God’s directives and guidance which always result to blessings to the state.

Attributing the Osolo stool recognition to God’s time and wishes, Governor Oluwarotimi Akeredolu (SAN) said that “it was God that did it not Akeredolu.”

The governor, who is a former President of the Nigerian Bar Association (NBA), did not conclude his response until he had assured Osolo Edward Adewole that his Staff of Office will be given to him.

The visit was later signed off, after the response of Governor Akeredolu, with the governor taking a group photograph with the Osolo and members of his entourage.