Ogun State Police Command made a breakthrough as it arrests a man said to be behind many burglary crimes in Awa Ijebu and 17 other suspected criminals in Itele Ota areas of the state.

Named Onyebuchi Chika, the suspected notorious burglar, according to a statement by the Police Public Relations Officer (PPRO), Ogun State Command, Mr. Abimbola Oyeyemi, an Assistant Superintendent of Police (ASP), was arrested early in the morning of Saturday after a long time of terrorising the Awa Ijebu area until the hands of operatives of the command reached him.

The statement read, “The men of the Ogun State Police Command have arrested one Onyebuchi chika, ‘m’, who is the brain behind many cases of burglary and stealing in Awa Ijebu and its environs.  The suspect, who was arrested in the early hours of today (Saturday), has been terrorising the area for quite some time now.  Luck however ran against him when a distress call was made to the divisional Police officer in Awa ijebu by the victim of his criminal act and the DPO led his anti robbery team to the scene, combed the area thoroughly and subsequently arrested the suspect.

Recovered from him, Oyeyemi said, were a sewing machine, two mattresses, cooking gas and some burglary instruments.

On interrogation, Chika confessed being a serial burglar to the extent that he had preyed on students of Olabisi Onanbanjo University residing in Awa Ijebu community, saying that the students were always his target.

In a related development, the statement continued, the policemen attached to Itele Ota division “in their efforts to rid the area of crime and criminality carried out raids of criminal hideouts and black spots in Ayetoro area of Itele where 17 suspected criminals were arrested. Recovered from them are bags of weeds suspected to be Indian hemp, assorted charms, eight motorcycles, one generator, nine different GSM phones and the sum of N123,000.”

In the meantime, the Ogun State Commissioner of Police, Mr. Ahmed Iliyasu, had ordered the immediate transfer of the two cases to state criminal investigation and intelligence department for further investigation. 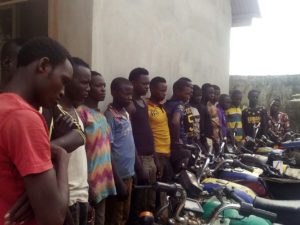 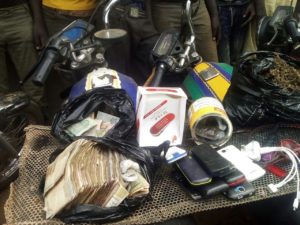