*As Army College of logistics graduates 13 Army, one Police officers in logistics management

*Why we need logisticians in military 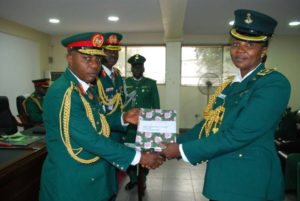 *Directs relocation of NACOL to permanent site for training enhancement

*Promises Nigerians Army will consolidate on successes so far, as Army chief thanks media

The Chief of Army Staff (COAS), Lieutenant General Tukur Yusuf Buratai, has reiterated that the Army remains committed and subordinate to democratic governance in the country as the force’s response to the support and encouragement being offered by Nigerian President Muhammadu Buhari.

General Buratai who spoke in Lagos, on Wednesday, as special guest of honour at the graduation ceremony of the Nigerian Army College of Logistics (NACOL)’s Logistics Management Course 14/2016 was of the belief that without the unflinching support of the President, there would not have been much to talk about.

“I would like to place on record our profound gratitude to the President, Commander-in-Chief, for his commitment and encouragement of the efforts at combating the security challenges facing the nation.  On our part, our response to His Excellency’s kind gestures is our unalloyed loyalty and subordination to democratic governance.  Commanders at all levels must continue to provide requisite leadership and ensure that their personnel are continually reminded of the need to uphold the tenets of military professionalism at all times by being guided by the provisions of the constitution,” he said.

Represented at the occasion by Commander, Nigerian Army Ordnance Corps, Major General Rasheed Yusuf, the Chief of Army Staff, who acknowledged that the Nigerian Army College of Logistics (NACOL) had maintained a reputation as the centre of excellence for the training of logisticians since it was established some 14 years ago, was apparently gladdened as he commended the college and its commandant, Major General RC Duru for what he described as NACOL’s numerous achievements with respect to training and various research inputs into Nigerian Army policies despite its numerous challenges.

Speaking further, the Army Chief, pointing out the place of logistics in military operations, said “Military operations are conducted on a tripod of strategy, tactics and logistics.  It is difficult for the tripod to stand properly if any of the legs is missing.  Therefore, talking from the point of logistics in relation to the tripod, a robust logistics plan is imperative for good strategy and sound tactics to succeed.  This underscores the importance of Nigerian Army College of Logistics to the Nigerian Army.

“The contemporary security challenges facing our dear nation have made the training of middle cadre officers on the rudiments of logistics crucial to meet new developments.  In the past decade, we have witnessed dramatic changes in the conduct of our operations from conventional to asymmetric warfare which necessitates the development of competent logisticians to meet this reality.  Consequently, the training of personnel on modern concepts and techniques in the field of logistics is imperative.  This is intended to ensure that personnel acquire the requisite skills for sound logistic support in all types of operations at all levels.”

The Chief of Army Staff (COAS), Lieutenant General Tukur Yusuf Buratai, informed the gathering that he had directed the relocation of the Nigerian Army College of Logistics (NACOL) from its current location to its permanent site in Ojo, Lagos.

NACOL currently shares a building with other military as well as some civilian neighbours on Moloney Street, Obalende, Lagos considered to now be inadequate for its many activities.  With the relocation, the Chief of Army Staff believes that there will be enough space and convenience for the College to carry out its programmes and activities unhindered hence the directives.

“My visit to this College in May this year provided me with the insights into some of the challenges facing the smooth conduct of training activities.  You have to remain committed to achieving the College’s objectives as these challenges will gradually be addressed.  I am aware that this current location impedes the College’s capacity to expand the scope of logistics training which would include training of Senior Non-Commissioned Officers.  In light of this, I have directed the Commandant to commence the relocation of the College to a permanent site at Ojo.  The eventual relocation would provide the requisite environment for a more efficient training of officers and soldiers in logistics,” said the COAS.

Congratulating the 13 Army and one Police officers on their successful completion of the course, the Army Chief reassured Nigerians that the Nigerian Army would continue to remain professional and focused on consolidating the successes recorded so far in the fight against insurgency, even as he expressed his unreserved appreciation of the Nigeria media for what he called their constant provision of good coverage of Nigerian Army operations.  He sought for more from the press, “Your cooperation is invaluable and integral to our efforts at defending Nigeria’s territorial integrity.”

Commandant of the Nigerian Army College of Logistics (NACOL), Major General RC Duru, in his own speech said, “Today’s graduation ceremony formally marks the successful completion of yet another Logistics Management Course (LMC).  The course assembled on 26 August, 2016 and is made up of 14 students comprising 13 Nigerian Army officers and one Nigerian Police officer.  It has been 17 weeks of intense training and academic activities for these students.

“The course is designed to train middle cadre officers and supporting staff in the preparation and execution of logistics plan in support of formations up to corps level.  This is done by developing their understanding and application of modern strategic management concepts appropriate to defence logistics, improving their professional skill in the acquisition of military hardware as well as planning and providing efficient logistics support for the NA (Nigerian Army) and Peace Support Operations,” he said, adding that the LMC 14/2016 had equipped the graduands to cope with most challenges they would likely face in their future career.