MMM Nigeria the scheme where members invest and are paid back between two weeks to four weeks with thirty percent profit have been frozen to stop withdrawal also referred to as payments.

Some users of the scheme including a “Guider” who spoke to newsmen confirmed that their account has been Frozen.

A  message from MMM administrator states that the freeze will last for a month.

They however blamed the action on the government and the end of the year withdrawal “frenzy”.

As usual in the New year season the system is experiencing heavy workload.

Moreover, to deal with the constant frenzy provoked by authorities in the mass media. The thing is still going well; the participants feel calm…

Hence on the basis of the above mentioned, from now on all confirmed Mavro will be frozen for a month.”

Marvo refers to the wallet which records member’s activities.

Here is a screen grabbed of the message. 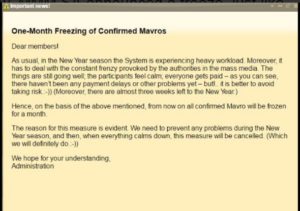