Leicester City manager, Claudio Ranieri has been awarded the Best FIFA Men’s Coach of the Year 2016. At a ceremony in Zurich, the Leicester boss was presented with the award by Argentine football legend Diego Maradona.

Ranieri inspired the foxes to their first ever English Premiership Championship last season which many described as a “fairy tale “.

Goal.com said: Ranieri, who led Leicester to the most unlikely title triumph in English football history, took to the stage and makes a predictably amusing and humble acceptance speech.

“I am crazy to be here!.. What happened in England last year was something strange… Dani Alves said earlier that you can still learn something new at 30. My age is 65 and only now am I learning to be a manager!”

The Leicester Manager in his reaction said that what happened last season in England was amazing, and that it was something strange.

“The god of football said Leicester must win!” he added.

Ranieri began his managerial career in the lower leagues in Italy during the late 1980s, and made his name at Cagliari, whom he took from Serie C1 up to Serie A in successive seasons.

He later went on to manage Napoli, where he led the team to qualify for the UEFA Cup, only to be sacked the following season. In 1993, he joined Fiorentina, and immediately led them to Serie A promotion, also winning the Coppa Italia and the Supercoppa Italiana in 1996, before moving to Spain in 1997, to manage Valencia and then Atlético Madrid.

With Valencia, he won a Copa del Rey and an UEFA Intertoto Cup, and helped the club to qualify for the UEFA Champions League. In 2000, Ranieri moved to England to become head coach at Chelsea.

His four seasons there saw Chelsea improve their points total season on season, with them finishing runners-up in 2004 and reaching the UEFA Champions League semi-final the same season.

He was sacked by Chelsea owner Roman Abramovich that May, but a number of players he signed and brought through during his time at Stamford Bridge formed the core of the side that went on to achieve domestic and international success in subsequent seasons.

On 13 July 2015, Leicester City announced Ranieri as the club’s new manager on a three-year contract. 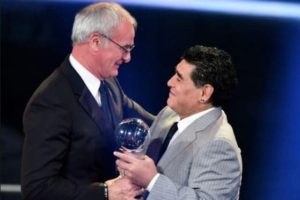