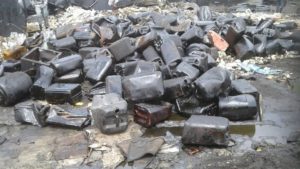 The operatives of  Lagos State Task Force, yesterday dislodged oil bunkers around Coker in Orile, Lagos and destroyed over two million litres of mixed diesel.
25 containers with 5,000 litres and 4,500 kegs of mixed diesel were also destroyed by the Agency.
Petitions from members of the public to the office of the Chairman, Lagos State Task Force, Superintendent Police Olayinka Egbeyemi detailed that due to the hike in the price of diesel, some people were mixing the product with
kerosene.
However, SP Egbeyemi who is currently in America for training directed his second in Command, a Deputy Supritendent of Police DSP, Wilson Alaba to lead the operation.
Meanwhile,  residents around the area told The Defender that those bunkers have been operating around there for more than seven years.
Mr Salami Ogunsanya, a tricycle operator said the oil bunkers buy 33,000 litres of diesel everyday and mix it with kerosene to double the tanker capacity of 66,000 litres.
He also added that these hoodlums who engage in this illegal business rob innocent members of thier valuables at night.
Mr Ogunsanya and other residents  appreciated the Governor of Lagos state, Mr Akinwunmi Ambode and the Lagos Task Force for their prompt intervention.
Again, the Task Force between July and September impounded 3,480 motorcycles plying restricted routes across the state and also arrested 5,890 hoodlums out of which 1,500 were screened out and 4,390 prosecuted.