*Promises sustaining the tempo by extending the honour beyond Sokoto

“It is not actualized or influenced by any political sentiment. It is done based on merits and conviction as brothers who were tested and trusted for their track records.” 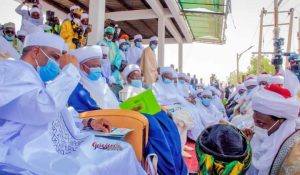 The turbaning ceremony, on Sunday, took place at the Sultan’s Palace, in the ancient city of Sokoto and Seat of the Caliphate.

At the all-important event, the Sultan urged the new title holders to remain committed to the course of strengthening the administrative roles and responsibilities of the Caliphate to humanity.

Sultan Abubakar, who presided over the traditional and cultural rites in order of the royal titles, noted that the Usmaniyyah turbaning was historic as it retraced the footprints of the late Sheikh Usman Dan Fodiyo’s purposeful legacies. 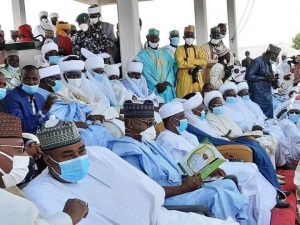 He said: “It is not actualized or influenced by any political sentiment. It is done based on merits and conviction as brothers who were tested and trusted for their track records.

“The Caliphate will sustain the tempo by extending the honour beyond Sokoto in times to come.”

The Sultan stressed that Sokoto remains a true centre and hub for the unity of Nigerians, irrespective of their backgrounds.

Alhaji Abubakar added that, “It is our humble belief that the new titleholders would assist towards achieving a favourable and rewarding Ramadan in peace and benefit for Muslims. We keep attracting people closer to the Caliphate.”

Former Kogi State Governor, Alhaji Ibrahim Idris, was the first to be installed as Jekadan Sakkwato at the event interestingly attended by the Governor of Sokoto State, Alhaji Aminu Waziri Tambuwal, who himself long ago benefited from the Caliphate title holdership as Mutawallen Sokoto, and other dignitaries at the event.

They were installed along with the Assistant Private Secretary to the Sultan, Alhaji Hali Maccido, son of 19th Sultan of Sokoto, the late Alhaji Muhammadu Maccido, who meritoriously got the honour of Dan Ruwatan Sakkwato.

Alhaji Jelani Aliyu Dogon Daji, the Director General and Chief Executive Officer of Nigeria’s National Automotive Design and Development Council, was turbaned with the title of Barden Sakkwato, the Warrior of Sokoto as the title implies.

The event, the first of its kind in the history of the Caliphate, was accorded a special status as three historic gates, among others in the ancient city, were shut to ensure crowd control and smooth conduct of the installations, which observed COVID-19 protocols.

The gates to the Sultan’s Palace included Kofar Taramniya, Kofar Marke and Kofar Rini, which were temporarily shut to vehicles, cyclists, among others as the ceremony lasted.

The title holders were entertained by a popular Kano singer, Tijjani Gandu (Abba Gida-Gida) with many Kannywood actors and actresses in attendance.

The event displayed a train of horses in a durbar-like procession.