The records from West Africa Examination Council (WAEC) indicating over 46 percent performance of students presented for 2016 school certification examination by Osun State have been described as a proof that those saying Governor Rauf Aregbesola was doing nothing about improving education standard in the state were ignorant of true state of things in Osun State education sector.

This came as the state government said that the improvement to the point of 46.3 percent performance attested to the fact of its huge investment in the education sector.

The remarkable improvement, The DEFENDER gathered, came for the first time in the last 13 years in the state.

In a statement, Friday, signed by the Director, Bereau of Communication and Strategy in the Office of the Governor, Mr. Semiu Okanlawon, the government said for a state that once fell to a woeful six percent performance prior to the Rauf Aregbesola administration to move up to 46.3 percent, it aptly illustrates the fact that the government’s various interventions in education is paying off.

Okanlawon, according to the statement, however said the government would not rest on its oars, even with the notable improvement just recorded, until the state emerged the best state in the country in external examinations, adding that 2016 WAEC results indicated that the 2016 performance rating remained the highest and the best in 13 years.

It would be recalled that the state governor, Ogbeni Rauf Aregbesola, recently attacked critics demanding his resignation for the state’s woeful performance in the last Senior Secondary WAEC examinations results describing them as “naïve and ignorant of statistics.”

Aregbesola said such call for his resignation stemmed from the “usual lack of knowledge of performance charts and attention to details that the opposition elements are notorious for”.  He said records and statistics of students put forward by the government in the past years had shown that there was improvement in percentage of overall results.

He simply described those who he said were presenting Osun as declining as not being honest proving that existing data showed their claims to be totally unfounded as he posited that the performance of pupils had not gone down under his watch as governor.

Those claims by the government were further attested to, with the Friday release by Aregbesola’s spokesman, Okanlawon, stating that results of 2015 WASCE showed that Osun ended up with 21 per cent in performance.

The Okanlawon said Osun, under the Rauf Aregbesola administration, had recorded gradual but upwards move from the abysmal performances due to the various interventions in the sector.

The statement said, “For instance, the state has discouraged enrollment of students whose performances in internal examinations were nothing to write home about adding that this has compelled many of the students to change their orientations towards learning.

“Other novel interventions such as provision of stand-alone Tablet of Knowledge (Opon Imo) to all students writing WAEC each year has made learning much easier.

“With the introduction of this tablet, students now spend quality times both in and out of classroom situations. The result being that there is no dull moment for every student who is desirous of true education,” the Bureau’s statement added.

It also said that better learning environment has also contributed in no small measure to the improved results.

“So far, Osun has completed 1,694 classrooms in the existing elementary, middle and high schools; providing accommodation for 84,700 pupils at 50 pupils per classroom. We have provided for them more than 100,000 desks and chairs, toilets and boreholes.

The government expressed confidence that in the years ahead, Osun’s students would be emerge best examples in true learning, adding that with the reforms already put in place, the state was on its path to educational glory. 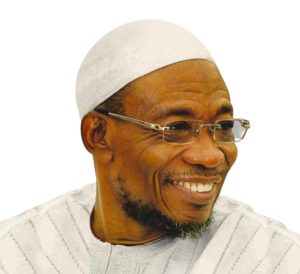 *Rauf Aregbesola: We won’t rest until Osun emerges the best state in the country in external examinations.