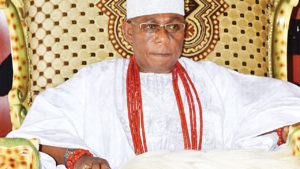 The Deji and Paramount Ruler of Akure Kingdom, Oba Aladetoyinbo Ogunlade Aladelusi, Odundun II, has removed the sitting Olu of Isinigbo, Samuel Elewuju Fadahunsi, by an order said to be with immediate effect.

The removal of Fadahunsi, according to a statement signed by Chief Press Secretary to Deji (CPS), Michael Adeyeye, “is predicated on his defiant attitude, insubordination to constituted authorities and the people of his community.

“In light of this removal, Mr. Samuel Elewuju Fadahunsi shall cease to be addressed as Olu under any guise.

“It is worthy to note that the immediate removal of the Olu of Isinigbo remains the prerogative of His Imperial Majesty as the Paramount Ruler of Akure Kingdom.

“The general public is hereby notified of these latest happenings.  His Imperial Majesty urges all the people of Isinigbo to go about their lawful duties and their normal businesses without any fear or favour,” the statement said.