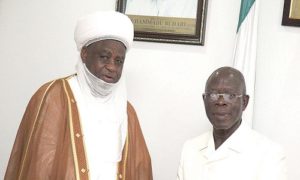 Sultan of Sokoto and President-General of the Nigerian Supreme Council for Islamic Affairs (NSCIA), Alhaji Muhammad Sa’ad Abubakar III, being received by Governor of Edo State, Adams Oshimhole, ahead of the conference that produced S. O. Babalola as Deputy President-General, NSCIA (South). 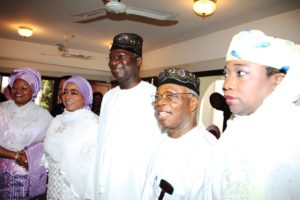 S. O. Babalola with Babatunde Raji Fashola (SAN), the Minister of Power, Works and Housing, in his days as Governor of Lagos State and others.

The Nigerian Muslim Community, otherwise called the Muslim Ummah of Nigeria, is structured in a way that the 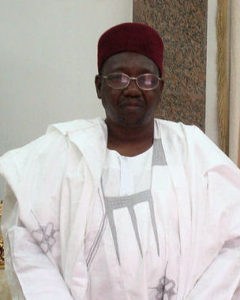 sitting Sultan of Sokoto is the leader.  The interpretation is that the Sultan is the spiritual and political leader of Muslims of Nigeria who directs the affairs of their religion.  Of a particular note is the responsibility for sighting of the crescent beginning and ending the annual Ramadan fasting, which, particularly, the current Sultan on the throne, Alhaji Muhammad Sa’ad Abubakar III has on his hands, in the sense that he has been a blessing and leading light not only to the Muslims in the country but also to the entire peoples as topmost traditional ruler and national leader.  Sultan Sa’ad Abubakar III continues to receive accolades, for he is doing well and even better than his predecessors had ever done.  Thanks also go to the Nigerian military community which took part in the making of the retired Brigadier General and former footballer.

But no leader has ever worked alone.  He works with others particularly lieutenants who in most cases could be referred to as deputy, governors, or ministers.  In the case of the Sultan as leader of the Nigerian Muslim Community, he has other officers who assist him in steering the affairs of the Ummah in Nigeria.  They are mainly the Deputy President-Generals South and North.  Whereas His Royal Highness Alhaji Abubakar Ibn Umar Garbai El-Kanemi, the Shehu of Borno, is Deputy President-General for Northern part of Nigeria (NSCIA), Alhaji Abdul-Azeez Arisekola Alao was Deputy President-General for South until his demise. Since the demise of Arisekola, the next to occupy the vacuum created by the death event was to be decided by the last Benin conference.

The conference meeting, hosted by the Edo State Governor, Adams Oshimhole and presided over by the President-General, Sultan, witnessed an election to fill the vacuum in the office of the Deputy President-General (South).  In the end, the Benin conference produced the brand new Deputy President-General of the Nigerian Supreme Council for Islamic Affairs (South) in the person of Alhaji Sakariyau O. Babalola to replace the late Aare Musulumi of Yoruba Land, Abdul-Azeez Arisekola Alao.  That was Saturday August 13, 2016.

The Femi Abbas’ statement said, “With the new appointment, Babalola becomes the second Deputy President-General of NSCIA for the Southern part of the country, after the late Aare Arisekola.

“He is to partner with the Shehu of Bornu, who is the Deputy President-General of the Muslim apex body for the North.

Alhaji Dr. Sakariyau O. Babalola, an honourary doctor of science (DSc) and Officer of the Order of Niger (OON), was born in the thirties (1930s) in Ede, Osun State. He started learning the Holy Qur’an at a tender age of six (6). He became so proficient in the teaching of the Muslim faith at ten (10) and was locally known in his community as a young teacher.

Subsequently, he attended St. Peters Anglican School, Oke Egan in Ede from 1948 to 1953. He has in addition, attended series of educational development courses nationally and internationally.  Alhaji Dr. S. O. Babalola, however, started his Trading Business in Lagos in 1955 with only 30 shillings and was immensely blessed with it.
Today, his business has grown into a conglomerate, diversifying into such areas as Haulage, Oil and Gas, Shipping and Communications.

In Philanthropy, Alhaji Babalola is magnanimous. He has brought smiles to the faces of indigent Nigerian students within and outside his local community. He has also single-handedly built a multi million naira auditorium (with a 1,500 seating capacity) for the Federal Polytechnic, Ede.

This is considered a major contribution to the development of infrastructure in the higher education sector in Nigeria. Perhaps, it is in the Telecommunication sector that Alhaji Babalola made significant contribution for which he was honoured by the Federal Government of Nigeria with the Officer of the Order of Niger (OON). He established the first indigenous and largest satellite communication outfit in Nigeria, Telemobile Nigeria Limited. His decision to establish such Telecommunication company in Nigeria is praiseworthy and visionary. In deep appreciation for the quality of leadership and contribution to the society.

Alh. Dr. S. O. Babalola has been honoured by his faith, his people and the Federal Government with awards as follows: Saraki Adinni of Lagos Central Mosque Edeland Merit award 2002; Aare Musulumi of Surulere original Central mosque; Officer of the Order of Niger (OON); Doctor of Science (DSC); Telecommunication (Honoris Causa) of the University of Calabar and Fellow of the Federal Polytechnic, Ede, Osun State.

“By the special grace of Allah, one of his profile content states, the Yoruba chief who prefers to be addressed as Alhaji all the times, S.O Babalola, OON, is today not only the President of Muslim Ummah of South West Nigeria (MUSWEN), but now more importantly partnering the Shehu of Borno in NSCIA ranking next to the Sultan of Sokoto as Deputy President-General, Nigerian Supreme Council for Islamic Affairs for the Southern part of Nigeria.