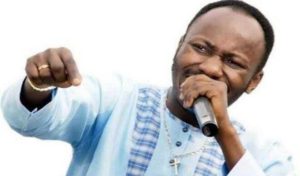 “I hope and pray that the Attorneys General would recommend some stiffer measures to be taken against renegade preachers such as Shekau and Apostle Suleman who are out to cause mischief and rancour.”

Some days ago, a friend posted a video of a pre-insurgent Shekau on my WhatsApp chat site. I found it a very a revealing video because the Shekau most of us have come to know was the one that had always been shown in the media dressed in military fatigue, standing somewhere in the bush, presumably in the north-east and holding an AK47 rifle, with his ragtag foot soldiers at the background. He would be seen defiantly looking into the camera haranguing his audience on the justification of his murderous cause and what would befall the nation when his troops overrun the country.

In this earlier video, Shekau was shown comfortably seated and preaching to a large captive audience. Those who have watched the video can confirm my observation that throughout the sixteen minutes of his sermon, Shekau was never seen quoting or reading from the religious books spread before him. But here was Shekau in his true elements, throwing barbs at the Nigerian State and belittling the symbols of the state: the Constitution, the National Anthem and the National Pledge. You could see him pugnaciously upbraiding his audience   for giving their allegiance to the State. Like all preachers of that ilk, Shekau had an engaging style which could have a mesmerising effect on his listeners. That is why in interviews with many captured Boko Haram fighters they tended to speak in the same manner as Shekau and regurgitated the same rubbish he was known to espouse in his sermons.

Anybody watching the video would know that Shekau even at that time was engaged in treasonable acts by the line of his preaching and exhortation to his audience to disobey the State. One could also see that by the passionate manner Shekau was preaching, he was just a step away from taking up arms against the State at the slightest provocation.  That is why when one compared this video with the present day videos of Shekau trending in the cyberspace one really saw no difference. It was the same inanities, the same belligerency and the same call to arms against the Nigerian State.

However one would expect that the security men trailing Shekau during his pre-insurgency sermons to have performed their filial duties by filing their usual reports to their superiors. In the event that nothing happened to Shekau and his Principal, Mohammed Yusuf, who was reputed to preach even in a more heinous manner, matters worsened down to murder, mayhem and war. Inevitably this is what got us to where we are today in the unfolding Boko Haram saga.

Apostle Suleman is another preacher in the mould of Shekau and his fellow travellers. He was caught on tape, which I have seen, preaching to the congregation in his church, and exhorting them to kill fellow Nigerians. Typical of such rabble rousers he was also not quoting from any scriptures but latching on to the unfortunate happenings in southern parts of Kaduna State, likening it to a religious pogrom and ordering his congregation to take the laws into their hands. What is more sickening about his sermon was the stigmatization, profiling and naming a particular ethnic group and proudly asking his followers to have them killed once they came near his church. Haba! When has Apostle Suleman become the State that he could order for the summary execution of fellow citizens with such impunity? Ethnic profiling is one of the worst crimes against humanity.  It led to mass killings of Jews during the Second World War and the same kinds of exhortations led to the genocide in Rwanda, Burundi, Congo, and Cote d’Ivoire in the more recent past. What is notable is that long after the crime, the perpetrators of those heinous actions were still being   pursued, rounded up, and taken before the International Criminal Court sitting in The Hague for prosecution.

We are fortunate that our gallant Armed Forces have reclaimed all the territories taken by Boko Haram and they are now hotly at the heels of their leaders, particularly Shekau. I am sure the moment he is captured he would made to face justice. What is important now is for the security agencies to be more vigilant to deal with other budding Shekaus, such as Apostle Suleman and his co-warmongers. There is no difference between Shekau and Apostle Suleman. Their incendiary sermons are both stuffed with the call to violence among citizens. Their demagoguery is inimical to our amicable interactions and could lead to perpetual instability in the polity and even war amongst us. They should be treated alike.

Hopefully the meeting of the Northern States Governors’ Forum which held last week in Kaduna has indicated that some concerted efforts are being made to tackle the persistent problems affecting the North. The fact that the Chairmen of Traditional Councils in the 19 Northern States and FCT were in attendance is even more reassuring as it shows the coming together of all leading stakeholders, putting their heads together, to get to the roots of these problems. I hope more than any other matter, the endemic problems affecting southern parts of Kaduna had been moved to the front-burner for quick action. It is necessary to find a solution to this problem that has persisted without a solution over the years. It is a shame that ethnic groups that have coexisted for hundreds of years are now continuously tearing at each other to the detriment of their continual survival. Kaduna State is central to the North. Problems there easily percolate to other parts of the North. To worsen matters, due to its centrality serious problems in Kaduna State naturally cause communication gridlock across the North as interstate movements are hampered. It is therefore obvious that all parts of the North are stakeholders in the quest for peace in Kaduna State. Our Governors and Traditional Rulers should not allow room for busybodies such as Apostle Suleman to create division and cause more mayhem.

It is also gladdening to hear from the mouth of Kashim Shettima the Chairman of the Northern Governors’ Forum that, ‘the Attorneys General of the nineteen Northern States are working together to review the criminal justice system of Northern Nigeria with a view to amending the penal code to stipulate penalties for criminal offences prevalent in the North today which were not envisaged by the penal code’. I hope and pray that the Attorneys General would recommend some stiffer measures to be taken against renegade preachers such as Shekau and Apostle Suleman who are out to cause mischief and rancour.