Nigeria’s President, Muhammadu Buhari, on Sunday, seized the occasion of the 2017 Armed Forces Remembrance to speak to troops in Sambisa Forest, United Nations Mission in Liberia (UNMIL) and the Air Force Base in Yola.

The President, accompanied by Vice President Yemi Osinbajo, the Senate President, the Speaker of the House of Representatives, the Acting Chief Judge of Nigeria, the Service Chiefs and the Inspector-General of Police, had earlier performed the wreath laying ceremony in honour of the fallen heroes before the video-conference.

Starting with troops in Sambisa Forest, the Commander-in-Chief of the Nigerian Armed Forces, according to transcript of the conversation made compiled by the Office of the Special Adviser to the President, copy of which was emailed to The DEFENDER, on Sunday, told the officers and men at the front that they had done Nigeria great.

“Goodmorning officers and men of the Seven Division of the Nigerian Army. You have done Nigeria a great pride. Your success was received spontaneously by all Nigerians. I congratulate you and thank you very much for the honour done to the country and to us. Well done!

“I wish you and your families well and I hope that you are in touch with your families. I wish you more success and please maintain the standard of discipline and efficiency. Thank you very much indeed.

“God willing as you briefed us, in 2018, the last contingent of Nigeria troops in Liberia will come back. I sincerely wish them a successful operation and I wish the General the best of luck.”

In his conversation with the officers and men of Air Force Base Yola, the President said, “That was a good presentation. I get regular briefing from your Chief of Air Staff. Your performance speaks for itself and you have raised the morale of your colleagues in the military especially the army. With your hi-tech performance and platforms, we have been able to restore the sanity and the territorial integrity of Nigeria; I congratulate you.

“For the officers and men, you know you cannot be over-trained. With your hi-tech outfit, training has to be continuous and I am very pleased with the initiative that you have taken in maintenance of equipment. It is very encouraging and a boost to our morale here.

“I congratulate you and please pass my message to your families that we are very mindful of their patience and anxiety whenever you are in the field. Thank you very much indeed,” the President and Commander-in-Chief of the Armed Forces of the Federal Republic of Nigeria, Muhammadu Buhari, said on Sunday. 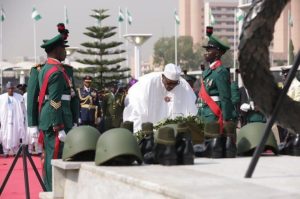 The President performing the wreath laying ceremony before the video-conference, in the Arcade, Three Arms Zone, Abuja, Sunday.