Nigeria made a major breakthrough in its resolve to crush Boko Haram terrorists in the North East as it, on Monday, took delivery of four fighter aircrafts from its Pakistani counterpart.

This came ahead of 21 aircrafts approved for procurement by President Muhammadu Buhari to boost the operations of the Nigerian Air Force.

The 21 war planes approved for procurement by the Buhari administration, which delivery are expected by the first quarter of next 2017, are four helicopters gunships, four medium airlift utility helicopters, three live attack aircraft and ten primary trainers.

The four Super Mushshak aircraft, said to be modernised for modern warfare, delivered to the Nigerian Air Force, on Monday, also arrived ahead of ten others which the Nigerian government asked the Asian country to manufacture and subsequently sell to it for use in the ongoing counter insurgency operations in the North East.

The four war aircraft donated to Nigeria are meant to train Nigerian Air Force pilots on how to operate the war planes expected for delivery by the first quarter of next year.

Besides donation of the four aircrafts, the government of Pakistan also deployed pilots, engineers and other maintenance crews to guide the Nigerian users pending delivery of the others purchased.

The aircraft which were handed over to the Nigerian Air Force by the Pakistani Chief of Air Staff, Air Chief Marshal Sohail Aman, were in fulfillment of agreements reached by the two countries when Nigeria placed order for the ten expected war planes.

Speaking at the handing over, taking over and induction ceremony of the four Super Mushshak aircraft into the Nigerian Air Force fleet, at the 401 Flight Training School, Kaduna, the Chief of Air Staff, Air Chief Marshal Sadiq Abubakar, said the development had repositioned the Nigerian Air Force to carry out its role not only in the ongoing counter insurgency operations in the North East but also respond positively to security threats in some parts of the country.

The Air Force boss, who heaped praises on President Muhammadu Buhari for his prompt response to the operational needs of his security outfit, disclosed that so far, 20 aircraft have been purchased and added to the Air Force fleet since assumption of office of the President, a development, he said, was a far departure from the past.

He said: “I would like to specially thank Mr. President for his continuous support and consistent commitment to the development of the Nigerian Armed Forces.

“I want to put it on record today that the Nigerian Air Force has fared well since Mr. President’s assumption of leadership as our Commander-In-Chief.  As a result, the Nigerian Air Force is now strategically positioned into our highly disciplined and professional force through capacity building initiative for effective and efficient employment of firepower in response to Nigerian national security challenges but has also initiated the procurement of new modern platform to boost its capabilities and the resolve to tackle Nigeria’s security challenges.

“The Nigerian Air Force has made tremendous improvement in terms of reactivation, training and enhancement of the welfare of its personnel.

“In the area of platform reactivation, the Nigerian Air Force has restored 15 air planes and helicopters into flying status in the last 17 months.

“Efforts are also at advanced stage to reactivate four additional air planes that will be deployed very soon for operations.

“It is our hope that by the first quarter of 2017, the Nigerian Air Force would have 21 additional new platforms in its fleet.

“We are highly delighted of this development because the last time the Nigerian Air Force was given this number of platforms at a time was in the early 1980s.”

He added that, “In the area of training, the Nigerian Air Force has increased its annual recruit intake from 1000 to 4000 recruits.  For pilot training, the Nigerian Air Force has trained a total of 48 pilots from July 2015 to date while 62 second pilots are undergoing various forms of pilot training both locally and abroad.  By the end of first quarter of 2017, they would have additional 66 pilots to boost its operational manpower.”

Air Chief Marshal Abubakar continued, “Today, the Nigerian Air Force is inducting the Super Mushshack Aircraft into its service. This will impact positively on the pilot training efforts of the service. More so, 35 student pilots coming from the Nigerian Defence Academy will immediately commence training on the Super Mushshack Aircraft that have been inducted into service today.

“The procurements of these platforms lends credence to the fulfillment of Mr. President’s commitment in re-equipp 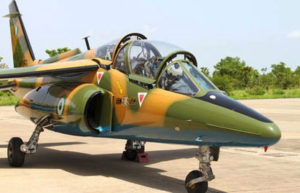 “One unique feature of these trainer aircrafts is the ruggedness to perform both basic and advanced acrobatics at the initial stage of military flying training which is an essential criterion for producing seasoned combat pilots.”

He commended the Pakistani government for its continued support to the Nigerian Air Force.

“The Pakistani Air Force has consistently supported the Nigerian Air Force in her quest for self sufficiency in training, research and development as well as improving her professional efficiency.

“With this relationship, we are assured of regulation supply of spare parts as well as the necessary technical and operational supports required to keep the Super Mushshack Aircraft flying.

“We are indeed grateful to the Pakistani Chief of Air Staff for his support to the Nigerian Air Force,” he said.