As schools across Ogun State, South West Nigeria resume for the second term of the 2022/2023 academic session today, Monday, January 9, 2023, Governor, Prince Dapo Abiodun, has read a riot act to principals and teachers of the schools on the use of hijab.

This was regarding the often overzealousness of teaching staff, who have been incapable of knowing the position of law on fundamental rights and pushing religious bigotism behind over the use of hijab by Muslim female students, which the Supreme Court has now permanently settled in a judgement on the matter. 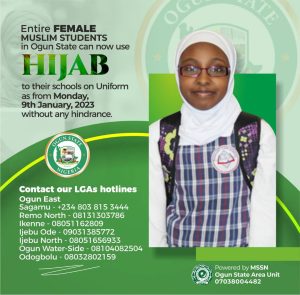 Governor Abiodun warned such secondary school principals and teachers from preventing any willing student from using hijab, stressing that any staff, teaching or non-teaching found culpable will face dire consequences.

The governor, reportedly, issued the warning through his Commissioner for Education, Science and Technology, Professor Abayomi Arigbabu during a pre-resumption meeting with all stakeholders, held on Friday January 6, 2023, at Lisabi Grammar School, Idi-Aba in Abeokuta.

This was coming as the Ogun State Chapter of the League of Imams and Alfas under the leadership of cmChief Imam of Egba Land, Sheikh Sadrudeen Bamgbola, directed Muslim students attending public schools in the state to wear their hijabs on school uniforms from Monday 9th January, 2022 when they resume for 2nd term of the 2022/2023 session.

The League of Imams said in a statement signed by its Secretary General, Sheikh Tajudeen Adewunmi, on Tuesday January 3 that the use of hijab will begin on January 9, 2023, when students return for their second term.

It also said only “desiring and willing female Muslim students could wear a white-coloured shoulder-length cape hijab as they resume for the second term of the 2022/2023 academic session on Monday, January 9, 2023, and henceforth without any fear of molestation or punishment.”

The government, however, cleared air on the matter at a meeting summoned by the Commissioner for Education, Science and Technology, Professor Abayomi Arigbabu, that was attended by zonal education officers, principals, teachers and non-teachers associations across the Ogun State.

The Commissioner cautioned staff in public schools from stopping any female student from using hijab and anyone found culpable will face the consequences.

Multiple sources at the meeting, we gathered, said Professor Arigbabu asked the principals and teachers in the state public schools to focus on their official assignment of imparting knowledge and not preach religion or try to convert students to another religion.

According to the source, Professor Arignabu asked the representatives of the officials of Ministry of Education, principals, teachers and non-teachers to take the message to others in their various schools.

He told them that there is no circular that prevents the use of hijab in public schools and students should be allowed to practice the religion of their parents.

It would also be recalled that the Ogun State Muslim Council last month had asked the state government to reverse what it referred to as “deliberate act of indoctrination, victimisation and forceful conversion of Muslim students in the state public primary and secondary schools.”

The Secretary General of the OMC, Alhaji Kamaldeen Akintunde, in a statement after the meeting, said the issues of concerns include compelling Muslim students in government-owned schools to take Christian Religious Knowledge (CRK), forcing them to remove their hijabs and participation in Christian fellowships on assembly grounds.

Ahead of resumption today, the League of Imams and Alfas has set up help lines and monitoring team to note any victimisation on the use of hijab in public schools.

The Muslim Rights Concern (MURIC), like OMC and League of Imams and Alfas, had over the times alerted the Ogun State Government to the challenges faced by Muslims in schools and offices in the state, which the government appears to have been by the authorities with the latest riot act.