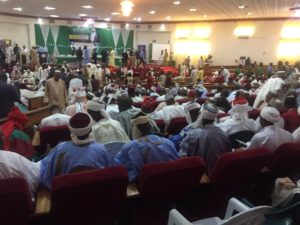 *Cross section of guests at the symposium venue, yesterday. 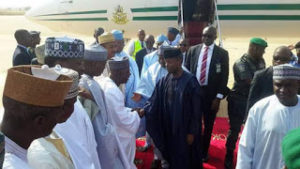 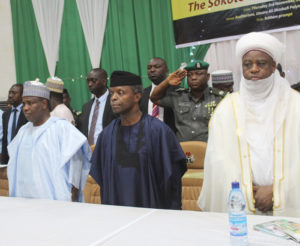 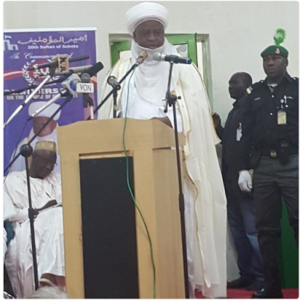 *The Chief Celebrant, Sultan of Sokoto and Sarikin Mu’mineen of Nigeria, Alhaji Muhammad Sa’ad Abubakar III, delivering his address at the symposium. 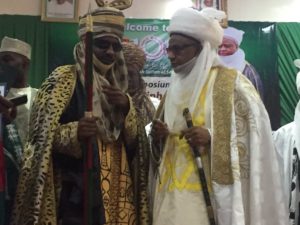 *Chairman of occasion and Emir of Kano, HRH Alhaji Muhammadu Sanusi II and Chairman Organising Committee of the event and Etsu Nupe, HRH Alhaji Yahyah Abubakar, at the event. 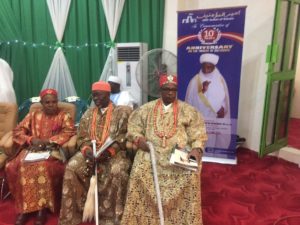 *Some Igbo traditional rulers at the event.

The Sultan of Sokoto, Alhaji Muhammad Sa’ad Abubakar III has warned that the anti-corruption fight by the current administration in the country should rather than being viewed as witch-hunting be embraced by all as measure to cleanse and rebuild.

Speaking on Thursday,at the opening ceremony of the International Symposium on the Sokoto Caliphate, held to mark his 10th year on the throne, the retired General wondered that someone would be arrested for having stolen public funds and some people would be insinuating that he was being persecuted because he did not belong to the ruling party.

He said without collective effort by all Nigerians of all backgrounds to stop the evil ones amidst who corruptly endanger the growth and development of the country economically, politically and religiously, that there would be no development and even the restructuring that people were agitating for would not work.

Sa’ad Abubakar, who is the President-General, Nigerian Supreme Council for Islamic Affairs (NSCIA), attributed the slow pace of development in Nigeria to misplaced priorities by political leaders, charging that Nigerians must muster the courage to question their political leaders on how they spent state resources and to make input to policy issues that involves their wellbeing.

He said that it was only when citizens began to ask questions that governors and other leaders would sit up and begin to take the people seriously.

“We want to call on our leaders to please check themselves, especially the governors.

“I want to be blunt here.  Why should a governor build a N30 billion airport when he has no money to pay salaries?”

He expressed regret that most times, Nigerian leaders had misplaced priorities, putting up projects that were of no benefit to the masses.

The Sultan advised that instead of duplicating projects like airports around the states, resources should be diverted to meet other cogent needs that would be of more use to the masses.

“There is need to begin to listen to the cry of the common man, to understand their needs rather than just carrying out projects.

“Of what use is it to be building airports worth billions of naira when the roads that the common man travels are bad?  Instead of having an airport here in Birnin Kebbi that hardly sees one flight in one year, and then you have an airport in Dutse that only lifts pilgrims; Then you have an airport in Kaduna in Bauchi and Gombe and another one in Ekiti, in Makurdi and so on, while the roads which the common man uses for his day to day activities are so bad.

“You can imagine if you are travelling from Minna to Abuja, how many hours it will take you and from Lokoja to Okene down to Akure due to bad roads.”

Abubakar said these were the things political leaders needed to check and talk to themselves about adding that “if you don’t say the truth you can’t have progress.”

He said that the common man, in reality, has no food, no money among others and further urged Nigerians to stop hiding behind religion, politics and tribal affiliations to perpetuate crime.

He admonished the people to learn to call a criminal a criminal, regardless of affiliation and come together as good people to fight the evil ones among them, for development to workout.

“People hide under politics to say or do certain things that are totally against the security of the state.  If the person is arrested, the next thing you hear is that it is because he does not belong to the ruling party; what is bad is bad.  Whether he is a Muslim or Christian or APC or PDP, remove all these and let him answer his name, a criminal, you have stolen government money.

“But once we start using tribe among others to claim right, it is not good. We must all rise up and help government to get the money back.”

Abubakar urged the Federal Government to convene a national security summit of all stakeholders, including traditional and religious leaders, to deliberate on security issues; from militancy to Boko Haram to kidnapping.

The host governor of the events, Alhaji Aminu Waziri Tambuwwal of Sokoto State was happy that all that needed to take from the Sultan’s several words of advice on progress and development particularly security including the Vice President Yemi Osinbajo were physically present.  He then urged everyone to be guided by the Sariki’s counsel.

The Sultan’s two deputy president-generals of the Nigerian Supreme Council for Islamic Affairs (NSCIA), Shehu of Borno His Royal Highness Alhaj Abubakar Ibn Umar Garbai El-Kanemi (North) and Alhaji Sakariyau Babalola (South) were visibly present at all the event to do the leader of leaders a big honour on his day.

In the meantime, Vice President Yemi Osinbajo has described Sultan Muhammadu Sa’ad Abubakar as worthy scion of the founding fathers of Sokoto caliphate.

He was speaking in Sokoto while declaring open an international symposium on the Sokoto Caliphate as part of activities marking the 10th anniversary of the Sultan’s ascension to the throne .

“Ten years into the your royal sojourn, you are in good standing with your people,” he noted.

The Vice president observed: The Sokoto Caliphate was founded over 200 years ago on the sterling principles of honesty, piety, good governance and truthfulness, among others.‎”