*Says it recovers over N360m in their homes, as it says Gov Wike frustrates its operation

Department of State Service, DSS, yesterday, said  it recovered over N360 million from the residences of three judges following raids, on 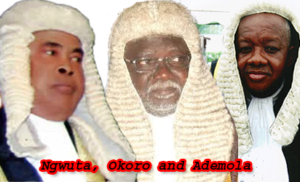 Friday night,‎ of the residences of seven judges  of the Supreme, Federal and High Courts across the country.

The DSS claimed Governor Nyeson Wike of Rivers State frustrated the raid of the house of one of the seven judges in which it alleged about two million dollars was being kept, a charge Wike rejected.

Clarifying his role in the drama that unfolded as the DSS team tried to raid the home of the judges located at 35/84B, Forces Avenue, old GRA, Port-Harcourt, Governor Wike alleged that the operatives manhandled and threatened to shoot him if he did not allow them to take the judge away.

He, however, said he acted based on the fact that he is the chief security officer of Rivers, describing the action of the DSS as a threat to the nation’s democracy.

Different reactions have greeted the arrest of the judges with all seeming to be against the action of the DSS.  But some other reactions query the rational behind negative dispositions towards the arrest if, according to them, it is generally agreed upon that any corrupt person no matter his status could not be above the law.

Where the NBA demanded the release of the affected judges who, according to it, were being detained, SERAP has written President Muhammadu Buhari demanding the immediate and unconditional release of the arrested judges.  SERAP, which also wrote the United Nations on the case, threatened to take legal action, both locally and internationally, against the President, should the arrested judges not be immediately freed.

SERAP said, in a statement on Sunday by its Executive Director, Adetokunbo Mumuni, that while it fully supported Buhari’s anti-corruption war, it viewed the clapdown on judges as a chilling “blow on the independence of the judiciary and a dangerous precedent that should not be allowed to stand.”

At various corners and on the social media, more watchers of the event ask why Governor Nyesom Wike and his supporters are the ones making issues with the arrest to the extent that he would be obstructing the DSS in the middle of the night from carrying out their job since anybody alleged to have committed a criminal act, according to the watchers, can be arrested at any time.  Some other people promising to continue to stand by the government in warding off corruption from Nigeria’s public life however said things should be done in accordance to the rule of law.

The questions some members of the public are asking the people attacking the actions of the DSS are to ascertain what is wrong with the action.  A source in Lagos who spoke to The DEFENDER on condition of anonymity asked, “Sometimes I am displeased when government or any security agency takes an action against a suspect particularly as regards our collective focus of ridding our country of the parasitic corruption and some people under the name of fighting for rights would be making the government or the security agency look like dictator or doing something outside the law.

“What is the rational behind all these attacks?  Governor Nyesom Wike has been speaking to the press since yesterday about how he was allegedly manhandled by DSS operatives while trying to arrest a federal judge in Port Harcourt.  What business has he with that?  People who listen to him speak do not ask him why he did not race to the scene while some other cases like that had happened in the past particularly when their outcome would be to his favour.  I think we Nigerian people should begin to sit down and learn how to show support for a collective fight against corruption as it is ongoing.  Else, we will be heading for a doom,” he said.

The DEFENDER’s findings revealed that the crackdown would be extended to more judges across the country suspected to be corrupt.

The DSS, explaining why it carried out the raids, said it was aimed at restoring “sanity and sanctity to the esteemed third arm of government”.

An official of the DSS, Mallam Garba, who spoke to journalists at the headquarters of the law enforcement agency in Abuja, said a planned raid on the residence of a judge in Rivers where, he said, there was an intelligence that he had $2million cash at home was frustrated by Governor Nyesom Wike who allegedly brought in “thugs” to prevent operatives from carrying out their mission, in connivance with an unnamed sister security agency.

He explained that the operations were based on allegations of corruption and other ‎acts of professional misconduct leveled against the suspected justices.

The DSS official defended the action of the DSS, saying it was in line with its core mandate, adding that the affected judges’ “expensive and ‎luxurious” lifestyle had been monitored by the agency for some time.

The DSS statement read: “The Department of State Services (DSS), in the past few days, has embarked on series of special sting operations involving some judges of the Supreme, Appeal and High Courts. These operations were based on allegations of corruptions and other acts of professional misconduct by a few of the suspected judges. The Service action is in line with its core mandate, as we have been monitoring the expensive and luxurious lifestyle of some of the judges as well as complaints from the concerned public over judgments obtained fraudulently and on the basis of  amounts of money paid.

“The judges involved were invited, upon which due diligence was exhibited and their premises searched. The searches have uncovered huge raw cash of various denominations, local and foreign currencies, with real estate worth several millions of Naira and documents affirming unholy acts by these judges. Meanwhile, some of them have made useful statements while a few have declined even with the glaring evidences that were found against them in terms of material cash, documents and property recovered pointing to their compromise.

“In one of the states where the Service operations were conducted, credible intelligence revealed that a judge had Two Million United States Dollars ($2,000,000 USD) stashed in his house. When he was approached for due search to be conducted, he, in concert with the state governor, mobilized thugs against the Service team. The team restrained itself in the face of unbridled provocative activities by those brought in by the governor. Unfortunately, the judge and governor also engaged the tacit support of a sister security agency.

“The Service surveillance team noticed that upon frustrating the operation, the judge, with the active support of the governor, craftily moved the money to an unknown location which the Service is currently making effort to unravel.

“These, in addition to other banking documents, including real estate documents have been recovered. Meanwhile, preparations are ongoing to arraign them in a competent court of jurisdiction in line with the laws of the nation.

“The Service would want to clearly state that it has never invited Justice Walter NKANU ONNOGHEN  (CJN designate) for investigation, neither is he being investigated by this Service. In addition, the Service would like to put it on record that it has tremendous respect for the judiciary and would not do anything to undermine it or its activities. The Service will also join hands with this noble institution in its fight to rid it of few corrupt judges whose actions are  undermining not only the judiciary but the common bond of our national life.

“Ladies and gentlemen, this current operation will be sustained and followed till sanity and sanctity is restored to the esteemed third arm of government and public confidence is regained.

“Members of the public are also encouraged to avail the Service of any information which could assist in this drive to rid our nation of corrupt practices and tendencies”.

Rivers State Police Commissioner, Mr. Odesanya, reportedly said he raced to the scene to maintain peace when he heard of the development.  Spokesman for the Police Command, DSP Omoni Nnamdi, who also commented said the police was not part of the DSS team that went for the judge, adding that the police only came in to maintain peace when the face-off between the DSS and those around was almost getting out of hand.