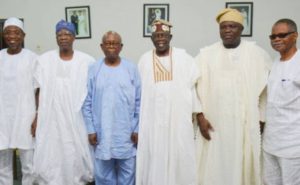 A leader of the Yoruba social-political group, Afenifere, Sir Olaniwun Ajayi is dead.  He died in the early hours of Friday at the age of 91.

A statement signed by the National Publicity Secretary of the group, Mr. Yinka Odumakin, disclosed the news of the death of the late politician.

“We received his passage with mixed feelings.  We are joyful that in a country with life expectancy of 53, Papa made it to 91 aging graciously and in good health till the last 24 hours of life when he had to be hospitalised for some health complications.

“We are however sad that his exit has robbed the group of the wealth of experience of a philosopher, prolific writer and memory bag that is irreplaceable,” Odumakin stated.

In a statement signed by his Special Adviser on Media and Publicity, Mr. Femi Adesina, President Muhammadu Buhari extended his heartfelt condolences to the family of Ajayi and the entire Afenifere, the pan-Yoruba socio-political group, on the passage of one of its oldest surviving members, Sir Olaniwun Ajayi.  The President also commiserated with the government and people of Ogun State on the demise of their illustrious son, author, legal practitioner, elder statesman and nationalist.

According to the statement, President Buhari payed tribute to Pa Ajayi’s inspirational and dedicated work to entrench and strengthen democracy in Nigeria through his passionate engagements in Afenifere, the National Democratic Coalition (NADECO) and the Patriots.

“Guided by Chief Obafemi Awolowo’s principle, the President believes that the late revered Yoruba leader effectively combined his sharp commentary on the state of affairs in Nigeria with uncommon patriotism while working tenaciously to further unity, development and prosperity in the nation.

“President Buhari urges all who mourn Pa Ajayi to emulate his lifelong commitment to dialogue, democracy and development, which are key ingredients for national growth.

“He prays that God will comfort Pa Ajayi’s family and grant the soul of the departed eternal rest,” the statement said.

Osun State Governor Rauf Aregbesola in a statement signed by the Director, Bureau of Communication and Strategy, Office of the Governor, Mr. Semiu Okanlawon, said the late frontline politician believed and worked for the progress of the Yoruba race and the country as a whole.

The governor, who described the deceased politician as a giant and one of the surviving disciples of the Awolowo school of thought, said like the late Chief Obafemi Awolowo, the late Ajayi advocated for true federalism and resource control as panacea for the political imbalances in the country.

Aregbesola said the late politician was one of the best the country had produced as he never wavered in his political philosophy until his demise.

The statement read in part: “He was a politician of high repute and immense clout. His political horizon spread across the country and beyond. He was a giant in the battle for a better Nigeria.

“All his life, he defined his politics and pitted his tent early in life with the progressive school.

“Even after the demise of the late sage and when others abandoned the Awoist camp for other political philosophy, Pa Olaniwun Ajayi remained steadily on the Awo progressive track.

“He was, till he breathed his last, very consummate about the progress and development of Nigeria as well as that of the Yoruba race.

“To therefore describe him as a top-on-the-shelf politician and Awoist disciple of a first class hue is to aptly capture his essence as a politician.

“Nigeria as a whole and the Yoruba nation would surely miss his wealth of experience,” Aregbesola also prayed for the repose of the late politician in the bosom of his Lord.

A wonderful Nigerian is gone – Olanrewaju

In his short message, former Minister of Communications, Major General Tajudeen Olanrewaju, told The DEFENDER that the late political icon of Awolowo political college was an excellent man always thoughtful about development of Nigeria.  He said Nigeria would miss his wealth of experience and contributions.

Olaniwun was a wonderful Nigerian – Ezeife

Former Governor of Anambra and an all-time progressive of South East extraction, Dr. Chukwuemeka Ezeife, described the death of the late Afenifere leader as a rude shock even though he agreed that Olaniwun Ajayi at 91 did not die young.  He believed that a man whose contributions were still relevant in the ongoing national rebuilding process could not be said to have left at a good time as his wealth of experience would continue to be missed by all.

In his own reaction, Igwe Ezeoba Alex Nwokedi described the late Ajayi as a fine Nigerian that would be missed for ever.