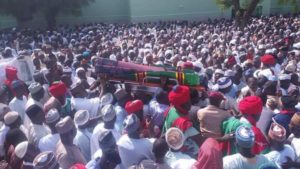 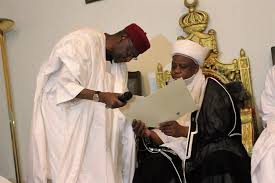 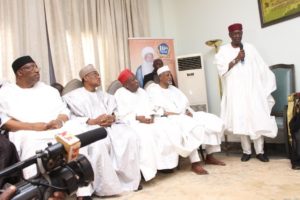 **FG delegation led by Chief of Staff to President Muhammadu Buhari, Abba Kyari, at the Sultan Palace for condolence.

*FG: Dasuki, a bridge builder and epitome of peace and unity

The remains of Sultan Ibrahim Dasuki were finally lowered into mother earth, Tuesday, at Hubbare after funeral prayers at the Sultan Bello Juma’at Mosque in Sokoto.

That happened even as first son of the deceased and former National Security Adviser, Col. Sambo Dasuki (rtd) turned down the offer by the Department of State Service for him to attend the father’s burial to pay his last respect.

It was also disclosed during the burial in Sokoto Tuesday that the Col. Sambo Dasuki rejected offer to visit the father while he was in hospital.  The Minister of Interior, Major-General Abdul-Rahman Danbazau (rtd) made the disclosure, confirming that Sambo rejected another offer to participate in the burial of his late father and stay with his brothers throughout the mourning period.

Danbazau spoke to newsmen shortly after the presentation of the condolence message of President Muhammadu Buhari by the delegation of the Federal Government, comprising seven ministers led by the Chief of Staff to the President, Alhaji Abba Kyari.

His words, “As Minister of Interior, I discussed with the Director General (DSS) on the need to allow the former NSA to visit his sick father when he was in the hospital but when the offer was made to him, he rejected and said that he preferred to pray for him. He was also offered to come to Sokoto and stay with his relatives, siblings and others throughout the mourning period but he opted not to come. This is the true situation,” Danbazu said.

Earlier, Kyari, while presenting the condolence message to the sitting Sultan of Sokoto Alhaji Muhammad Sa’ad Abubakar III, said President Muhammadu Buahri expressed sadness at the death of the 18th Sultan who he said had been a bridge builder and epitome of peace and unity in the country.

In his remarks, Sultan Sa’ad Abubakar III thanked Allah for granting them a worthy father (Dasuki) who lived a fulfilled life.  “Thus, it is a great loss to us. He was our father, everybody has his time and his time has come,” he said.