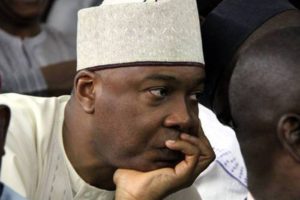 * APC elements must not rest on their oars – Source

The confirmation screening of the Chairman of the Economic and Financial Crimes Commission (EFCC) Chairman, Mr. Ibrahim Magu, and four other members of the commission did not come up Thursday as announced on Wednesday by the Deputy Senate President, Ike Ekweremadu,

Contrary to the announcement made by Ekweremadu, the screening Mr. Magu was found to be absent on order paper of the Senate for Thursday, The DEFENDER learned.

Ekweremadu who presided over plenary Wednesday had told his colleagues that process for confirmation of the EFCC boss would commence Thursday.

The anti-graft agency’s boss, Magu’s name along with four other  members of the commission was sent to the Senate by the Presidency via a letter signed by Vice President, Professor Yemi Osinbajo, in June but the letter was not read on the floor until July 14, this year.

The DEFENDER had reported some event watchers Wednesday, who, reacting to a petition to the House of Representatives by Mrs Patience Jonathan praying the honourables of the green chambers to save her from EFCC’s harassment, said the cry she made to the lower chambers of the National Assembly was suspicious.

They queried why it was about the time the Senate was now set to commence the confirmation process of the EFCC’s boss that Mrs Patience Jonathan was bringing her suspicious cry, an attitude they said was more like her trying to thwart the confirmation of Ibrahim Magu.

When asked to comment on the failure of Senate to commence the confirmation screening Thursday, one of the watchers of the development said, “It is hoped that the reason for our fears is not revealing.  Considering the PDP Senators’ negative attitude toward things which could make this government of All Progressives Congress (APC) succeed, that kind of petition coming through a representative of the party (PDP) at the House of Representatives makes us so much suspicious that the PDP guys are up to something this time.

“The APC should therefore not rest on their oars.  We just pray that our thought is not what is happening,” he said, still insisting on condition of anonymity.

In the meantime, according to Deputy Senate Leader, Bala Na’Allah, who addressed Senate Correspondents after the Thursday plenary, the commencement confirmation screening of the EFCC boss and other four will now be December 15, which is a day after President Muhammadu Buhari will have presented his 2017 budget proposals.

Na’Allah however explained that the new date was chosen so that Senators currently on oversight functions across the country would be in attendance.