An anonymous decided to address the long time impression by some Nigerians of Southern part claiming that British handed over Nigeria to the Fulani race of the North and thus have been hell-bent seeing Fulani, at all times, as their number one enemy. In this piece he not only faults them but gives the truth they are not told or told but which they decide to dodge. Excerpts:

Our youths need to know this, Most especially brothers in South West, South East and South south of Nigeria.
Let us go down memory lane.

Someone said “Fulani is Yoruba’s number one enemy and that the British handed over Nigeria to them.”  This is not the truth.

The British did not hand over Nigeria to the Fulani. 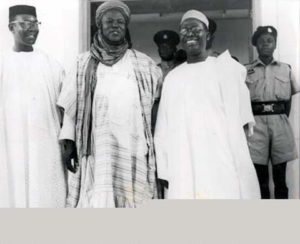 Parliamentary elections were held in Nigeria on 12 December 1959. The result was a hung parliament with no clear majority to form a government.

However, the Ahmadu Bello’s Northern People’s Congress (NPC), came a distant third with 1,922,179 votes to get 134 of the 312 seats in the House of Representatives despite getting less public votes.

The above three major political parties in the election did not get enough number of the seats to form a government. An alliance had to be formed to determine who would rule.

It was a no brainer that Zik’s NCNC and Awolowo’s Action Group should make a coalition government as they came first and second respectively.

Awolowo, then humbled himself and volunteered to be a Deputy Prime Minister or Finance Minister in a coalition government with Zik as the Prime Minister. This was because the Zik’s NCNC party had more public votes and seats than the Awolowo’s Action Group.

Zik invited Awolowo’s team to Asaba, the gateway between the Yoruba’s Western Region and the Igbo’s Eastern Region to hold coalition talks. The talks were a clever ruse to keep Action Group’s hopes high, so that Action Group would be kept distracted from meeting with other minor parties for talks, including: Northern Elements Progressive Union with 8 seats; Mobolaje Grand Alliance with 6 seats; Igala Union with 4 seats; Independents Candidates with 4 seats; Igbira Tribal Union with 4 seats and the Niger Delta Congress with 1 seat.

Whilst the Action Group team was waiting in Asaba for a meeting with the NCNC, they read in the news that Zik and the NCNC had gone up North and clinched the deal with Ahmadu Bello on forming a coalition government with the NPC.

Tafawa Balewa, a Fulani, would be the Prime Minister of Nigeria while Zik would be the figure head Governor-General. Even Nkrumah of Ghana was shocked. He asked Zik why having spent so much energy fighting for colonial emancipation and then settling for a toothless bulldog role when Nigeria needed him the most.

Zik wrote in his autobiography why he did not form a coalition government with Awolowo.

In 1947, with over £13,500 raised from the Yoruba people and given to the NCNC, Zik had led other six prominent NCNC delegates to London to protest the “obnoxious laws” of Governor Arthur Richards. The trip ended in failure with backbiting, abuses and accusation of theft against Zik. Zik’s opponents at the NCNC, accused him of squandering the money and the trust of Nigerians.

Zik replied insinuating that the Yoruba on the team, that are: Mrs. Fumilayo Ransome-Kuti, Prince Adeleke Adedoyin, and Dr. A. B. Olorunnimbe, were the problem.

There erupted a heated and prolonged press war between Zik’s Political Reminiscence in his West African Pilot and H.O. Davies’ Political Panorama in the Daily Service. This led to Igbo in Lagos rushing to buy machetes in large numbers thinking a tribal war was imminent.

The Governor and his General Secretary, Hugh Foot, quickly called Zik and H.O. Davies to order at the Government House.

Zik went away with the resolve that “the Yoruba must not be allowed to rule over others in Nigeria”.

And afterwards in the Daily Service published the speech of Zik in 1949 about Igbo being destined by God to conquer and rule over others. This among others, will explain why Zik rejected Awolowo’s offer of a coalition government in 1959.

The north had been reading Zik and the Igbo through the lens of his 1949 speech ever since.

The north way of neutralising Zik when the opportunity came in 1959 was to offer him a powerless post, which surprisingly Zik and the NCNC dutifully accepted in place of being Nigeria’s first Prime Minister.

Zik had thought that the Igbo can easily manipulate the North in place of the educated Yoruba. He thus manipulated Balewa to arrest Awolowo in 1962 and to have him jailed for 10 years in 1963.

Zik also manipulated Balewa to remove from the Western Region the Edo, Urhobo, Itsekiri and Western Ijaw that account for 70% of the oil wealth in Nigeria and created for them the Mid-West Region.

The Igbo coup plotters tried to undo Zik’s mistake in 1966. And unfortunately, they killed other tribes and left theirs, which resulted in the civil war.

Not many Igbo especially the young ones know this narrative. I don’t think the Yorubas, even their elders remember this. Has the leopard changed its spots?