“With your attitude, your affairs will be left in the hands of the wicked and nobody will show interest in fronting to rescue the situation. You are more educated enough than not to decipher when a lunatic and the normal engage in fight of shouts.”

Most Nigerians just look at issues at surface…That is why they disappointingly misunderstood the fainting of Prof. Pondei. Reason Nigeria may not be better in short time to come is because many of the masses agitating for better Nigeria don’t support the process for achieving it.

I do not expect that people would, rather than seeing to the depth of Pondei’s fainting, choose to celebrate their jest of him the way I saw. Somebody even screamed, “MD don pass away o!” Another said, “They asked him a big question and he collapsed because he didn’t have answer”.

What question was he asked? Did they ask him question about stealing? No. They asked, “You are preparing to spend, pay scholarship and your 2019 budget expired in May 2020. Where do you intend to get money?”

Get it right fellow Nigerians! Instead for you to wrap Akpabio and Pondei up with these rogues, who bled NDDC depriving and impoverishing the innocent people of Niger Delta for 19 years, you are supposed to take side with the people driving the clean-up process.

Put yourselves in the shoes of Pondei, a professor of medicine, who has only been there for four months. I am not saying Pondei or Akpabio is saint. If we have saint among humans, there will be no need for Allah Almighty. But no. Only Allah is pure. As I try to live a life within my means and be contented in pursuance of integrity, God forbid, if scrutiny is done of me today, there must be at least a skeleton inside my cupboard. 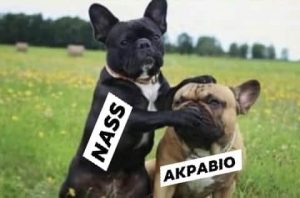 The reality of life of this world.

So, if you are looking for a saint to bring about your better Nigeria, all of you should quickly by now embrace Coronavirus and pass away in a jiffy. Because the better that you seek you can never get it. Allah who created this world and put people therein did not say he created saints. But he said his laws will guide their ways and that whoever obeys and follows his guidance will never live a life of frustration.. But you forsake the laws and guidance of Allah, how and why not will you know when and where to rate fellow human beings? So sad, up till today, some Nigerians still don’t trust trust President Muhammadu Buhari, the man who is next after Allah presently who can determine their life and death. If you don’t trust such celebrated man of inesteemable integrity in your leadership, how do you move forward?

Therefore, Akpabio and Pondei are currently the drivers of the clean-up process in the NDDC, before you cast your stone at them over accusation of “they are all thieves”, let the clean one among you be the first to cast the first stone.

With your attitude, your affairs will be left in the hands of the wicked and nobody will show interest in fronting to rescue the situation. You are more educated enough than not to decipher when a lunatic and the normal engage in fight of shouts.

These guys, who have now installed themselves in National Assembly committees on NDDC and who are working hard not to be exposed by the Forensic Audit ordered by President Buhari, are bombarding them (Akpabio and Pondei) left, right and centre, and causing confusion with their own Joi Nunieh. You, the people the NDDC team need to rally round them, only choose to form a crowd of onlookers who only share videos and make comedy out of the revelations going on, instead of forming robust and quality opinionating discourse deliberately tailored towards winning the battle.

Well, to me, #IStandWithForensicAuditOfNDDC as ordered by President Muhammadu Buhari, supervised by Minister Akpabio and driven by Pondei-led IMC.

Over N300 billion was pumped into NDDC in 19 years. That should earn the sub-region more than a Dubai. Note that Dubai used to be a mere desert, Muslim land. The people got serious about development and joined hands and thoughts against any tendency for corruption. They made the place a destination of choice for the entire world including Americans and your political and economic leaders in Nigeria. Note also that Dubai is not the name of a country. The monarchy nation is United Arab Emirates (UAE) with capital far apart: Abou Dabi. Dubai is doing well and spilling over to the rest of country.

The problem of Nigeria, I insist once again, is not leadership but followership who lacks discipline and hates discipline. They believe, live and celebrate only foreign made football and gloat over entertainment. They agitate a lot and take argument as a hubby. They believe in quick money and syndrome of small effort bigger money. In the end, their system don’t work. If Niger Delta works, it will spill over to South West and South East. But alas! Niger Delta have been problem of Niger Delta, they cry the names of Northerners. Nobody has come out yet to talk, other than Lauretta Onochie, the Amazon that speaketh the truth with thunder strike!