“Let me educate you all. When you cause your civil unrest and everywhere collapses into the kind of confusion you want so that Buhari would go, America (a so called democracy) will now bring weapons that it cannot supply to legitimate government and give to you under the disguise that it comes to evacuate its citizens from your crisis ridden society, to back you as gorilla warriors and so you will have turned Nigeria to Syria. Even same Trump returned with big shame from Syria.”

If anybody should feel popular by this article I just scripted, it is Ken Odibendi, who made sense in his comment, neutralising a post that tends to say President Muhammadu Buhari’s Nationwide broadcast Thursday night makes no sense because it did not address Lekki massacre, according to his own thinking. A Nigerian youth, Adeola Fayeun, was the poster. And Ken said: “Everyone is clamouring for the mention of the Lekki Toll Gate. Was Lekki Toll Gate the only place people died, or does it mean other deaths are not important? Why the fixation on Lekki Toll Gate?”

In truth, many who were disappointed by the well scripted broadcast address happened to be because what they expected did not happen. Had Buhari said “I hereby resign as President” they would say he is the Abraham Linkoln of Nigeria. What a detailed train called wailing haters of Nigeria!

I then came in with my long reply on the post and names will particularly mentioned here for no other reason but the mere fact of their need. I said to Ken Odibendi on the Adeola Fayeun’s post and this is intended to be For the Record. Thanks for reading:

Thank you very much, the fixation on Lekki Toll Gate is the very confirmation that these guys, including this poster, are FAKE.

When some people talk sometimes about Buhari’s speech, you get to know what television station they watch their address through. A TV station that has been selling Fake News to them and which, despite later confirming what it gives to them is fake, has remained their best television. Who cares?

Now to you, Adeola Fayeun, you have got to know that you and your coorts have no monopoly of public disturbance. We have more to live our lives with than your promotion of tension-soaked Fake News. Why social media helps you to do this, the same internet based channel has also helped us to be able to tell the world particularly our immediate public that you are not correct. Long before now that you used the main media dominated by your whatever interest groups to propagate this falsehood, we got no such opportunity of response or preemption of you doing it.

Personally, I took all the over 48 hours after the incident of shooting to investigate: Massacre of Lekki: where are the bodies? No hospital mogul has single body. Although many lives lost across Lagos and other states by the hands of your fellow violent protesters and there are clear undoctored video and audio evidences to prove them. You don’t see that except “Lekki Toll Gate massacre of many protesters”?! And you, three days after, cannot still produce evidence except all the 2015, 2019 videos presented as evidence of a condition in 2020. If somebody is fooling himself and claims not to know, we can help him to realise. 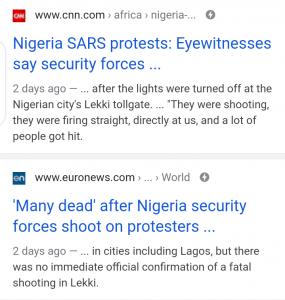 For three days now, no single family has come out to mourn that his or her son or daughter died by the shooting that happened the Tuesday night of October 20, 2020 you call Black.

Even your cherished EiE civil society that you so much relied upon for information that those of you who may not necessarily be present at the scene believe, it has since come out to apologise for his misinformation. But you, a Nigerian youth that wants us to agree his generation can take over the administration of Nigeria still sits on the empty rascality of a fake belief and you and the likes of Seun Okinbaloye, a broadcasting journalist who is in the best position to breakdown the speech of the President to the understanding of the people, have been groping in your fool paradise screaming THE PRESIDENT’S SPEECH DISAPPOINTING BECAUSE IT DID NOT ADDRRSS LEKKI MASSACRE. Who cares about your misapplication of opportunity of media?!

I can only ask: Is this how you want to waste away your youthful strength that you should spend on things other Nigerians can see and say, “This youth has paid his dues”?

Look, Jesus Chris (peace be on him) was 12 years old when he began the work that made you a Christian today. Prophet Muhammad (peace and blessings of Allah be upon him) became Prophet and messenger at 40. Long before he was 40, as youth, he had been in the company of five other youths making six of them who insisted that the Makkah society in the Arabian Pennisular could not be as ungodly as it used to be then and people heartlessly relating socially, politically and economically the way it was without the few of them thinking out of the box to bring positive change to their way of life. The six were a Think Thank – YOUTHS!

This led to how he was always visiting Mount Tur where the Angel eventually appeared to him and then the Revelations began. Before the collapse of Persian Empire and Roman Empire, from the effort if this set of youths, a brand new empire had emerged for mankind, which took One Third of World in size and population – The Islamic World. Effort by a set of Youths!

If you are either of Muslim or Christian, you cannot escape any of these two guides of youths. Yet, the leaders of your religious group will be blamed for not guiding you properly without the blamers realising that whereas it is easy to take a horse to the river, you cannot force it to drink of the water. At least I know of Islam, Allah says to the prophet: we have only commanded you to warn but not to force them to accept. Here again, for many years that we had no opportunity if social media to neutralise your false claims, you had arrogantly projected Islam as religion of blood. Can it be surprising therefore that in our very eye you sell a big falsehood to us about inexistent massacre we spend nothing to verify and, even after presidential address you asked for, you still insist on the lies?

This calls for you to ponder as a Nigerian youth that is considered as reasonable. Sometimes it enters your head that more than 500 people come to like and comment on your Facebook wall and you want to continue to impress them and you overshoot the runway. Who does it help?

You have asked the President to address you and because he is not a dunce that you think he is, he would not be ordered around by your inconsequential, inconsistency. Since you decided to make a good cause of #ENDSARS turn #REVOLUTIONNOW to overthrow a democratically elected government, you don’t expect the President to allow you the undeserving such right. The last time you checked, the President and Commander-in-Chief of the Federal Republic, where you are, remained Muhammadu Buhari and he is there till 2023, God willing. You should be the reasonable. The man is old enough to be your father.

If you think because America is joining in your hypocrisy of LEKKI MASSACRE that is merely a figment of your own imagination so you have arrived, somebody who speaks to your thinking faculty should help you to understand that there is nothing America can do that bothers us as a sovereign Nation.

As a youth who wants to be relevant, you should have asked or use your much visited wall to launch a campaign to ask America “Where are our Tucano planes?” WHY HAVE YOU NOT SUPPLIED OUR COUNTRY THE TUCANO PLANES OUR PRESIDENT PAID FOR since over two years now? Don’t forget President Donard Trump promised to deliver the TUCANO PLANES in 2020. Your own youthful strength does not work in that direction. The only strength it can muscle is to criticise negatively your very respected President for not joining you to take the fakeness you call LEKKI MASSACRE. NO WAY!

And if you think you know, you don’t know. America is happy to take your fake news because it has always been its interest to see Nigeria disintegrated. But we told them Nigeria is not Mali.

Let me educate you all. When you cause your civil unrest and everywhere collapses into the kind of confusion you want so that Buhari would go, America (a so called democracy) will now bring weapons that it cannot supply to legitimate government and give to you under the disguise that it comes to evacuate its citizens from your crisis ridden society, to back you as gorilla warriors and so you will have turned Nigeria to Syria. Even same Trump returned with big shame from Syria.

To tell you that the septuagenarian President is more intelligent than you even the youth, he addressed your Lekki massacre fakeness but how would you know? Read him:

“To our neighbours in particular, and members of the international community, many of whom have expressed concern about the ongoing development in Nigeria, we thank you and urge you all to seek to know all the facts available before taking a position or rushing to judgment and making hasty pronouncements.”

You stop your sadism against Nigeria! It doesn’t belong to only you. We all own the country. And if you don’t stop your disturbance, we will help you out by presenting your excesses to appropriate quarters.