At a time like this that the reality has dawned on all why peaceful co-existence among people of various religious and ethnic backgrounds in Nigeria is much required as a driver for security and development, the coming into the limelight of Pastor Umo Bassey Eno becomes a vital consideration, as one of those unputdownable tools that the country needs at hand. It is no wonder, therefore, that his emergence as “anointedly” elected candidate to succeed Governor Emmanuel Udom of Akwa State came without a kick.

The simplicity of Pastor Umo Eno is beyond a word of the mouth. It is practical, practicalised and practicable. The banker and investment expert came into my life – or (do I say?) I came into his life – in January 1992 when I came to him as a job seeker at Norman Investment Limited in Lagos, where he was General Manager. The Akwa Ibom State-born boss saw me a Muslim and Yoruba, neither Efik nor Ibiobio but simply an Isolo, Akure Local Government Area of Ondo State young Yoruba boy, yet, he magnanimously approved my employment into the Akwa Ibom people-owned company without special influence. I have been looking at him since that time as a special man. Just like the Sultan of Sokoto, His Eminence Alhaji Muhammad Sa’ad Abubakar, who is President General, Jama’atul Nasir-il Islam (JNI), Nigeria Supreme Council for Islamic Affairs, Chairman, National Traditional Rulers Council of Nigeria (NTRCN) co-chaired by Ooni of Ife and Co-President, World Regions for Peace headquartered in New York, United States of America and who saw me same a Yoruba boy but took me up and announced to my state leaders “Bashir is our son and he has been doing well with us”, Pastor Eno’s role in placing my feet on the access road to where I find myself today cannot be wished away in a hurry. 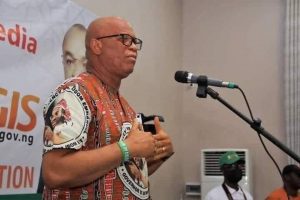 He not only employed me as junior staff of clerical status, being a new school leaver at the time, he placed me in what some National Assembly people will call a “juicy” Office of the Group Executive Vice Chairman, where – first – the overall boss, Madam Comfort Tonkumoh, also took me as son, and second, I became although a clerical staff but very highly influential that every person that had business to do with the company virtually needed to see me. Who would not regard a man that handles the files of all contractors including those of all staff, junior, senior or management?  May Allah continue to keep at rest the soul of Alhaji Usman Shehu Shagari Jr, son of former President Shehu Shagari, GCFR, who died in the ill-fated ADC flight that killed His Eminence Alhaji Muhammadu Maccido, the 19th Sultan of Sokoto and elder brother to the sitting Sultan of Sokoto, His Eminence General Ambassador Dr Alhaji Muhammad Sa’ad Abubakar, CFR, mni. May Allah bless the dead and strengthen living. Amiin. All my life I have been blessed to work with “my parents” who further prop me up to where I am. Among them, only Pastor Eno refuses to call me son but simply tells his people “Bashir was my colleague”. What a show of yet another charismatic leader!

He placed me on a good salary scale that produced the better ladder with which I later climbed to the top. He refused me to leave job while having to proceed to higher institution. I therefore schooled while I worked. He later grew from General Manager (GM) to becoming the Group General Manager (GGM) when the company grew from being a single-organisation establishment to Norman Holding Limited, a group of companies, and successfully had its tentacle spread beyond just the finance but now being actor across other businesses of discipline contributing to building of New Nigeria at that time: Auston Reed International Limited, Norman Bookshop Limited, Norman Investment Limited, Norman Engineering and Construction Company Limited, Norman Communications Limited and, of course, the media organization one of the first (if not only newspaper) with colours at the time, Sunray Newspaper Limited. There could have been no better way to contribute to building of New Nigeria than all of these aspects of the Organised Private Sector where Pastor Umoh Bassey Eno was a major player. Those companies played role in the building of Federal Capital Territory (FCT) Abuja. Thanks to Pastor Eno and others that worked with Madam Comfort Tonkumoh to make those great achievements happen. Where that era brought all of us together with the company’s lawyer, who is now Vice President of the Federal Republic of Nigeria, Prof. Yemi Osinbajo (SAN) will be a matter of another time. Mr. Ade Asekun, Assistant General Manager (Finance), later became Chairman of WEMA Bank and Mr. Tunde Fowler, our company’s management consultant, moved from being Chairman Lagos State Internal Revenue Service (LSIRS) to being Executive Chairman, Federal Inland Revenue Service (FIRS). This is how life has come. They all worked with Pastor Umo Eno as GGM of Norman Holding Limited in Lagos.

Mr. Eno, as we called him then, left the company in 1997, which led to my losing contact with him. But the attachment that had been established by his charismatic working relationship with me like others kept me asking and searching for him.  It must be mentioned here that while working with Pastor Eno, who loved me for who I am – a Muslim and Yoruba – and himself an Efic (Akwa Ibom), brought me in contact with so many great people including the man who later became Senator of the Federal Republic of Nigeria from Benue State, Chief Joseph Waku, Colonel Water Oki, who later became Brigadier General and Director General of the National Youth Service Corps (NYSC), and the same Alhaji Usman Shehu Shagari, very highly resembling son of former President Usman Aliyu Shehu Shagari.

I remember Mr. Calendar, the American business partner to Norman that died in the Ejirin, Lagos plane crash along with over 150 passengers including Prof. Claud Ake, during the military regime of General Sani Abacha. I also remember Mr. Jake Ekpele, who currently leads the Albino advocacy group in the country. I give all of those achievements at age 20 to the right guidance of the boss like friend, Pastor Eno. The deep love, which I had and still have for the pastor with means, who was a major funder of The Apostolic Faith Maboju, PWD, Ikeja, Lagos to the level at which it currently stands, made me to remain glued to searching for him. I was always at his Ikeja home to know if he was around but would not see boss that speaks Yoruba as fluently as he comes from the Oyo Messi lineage. I remained lost in contact with him for that long until, now as a Journalist, I conducted a search that handed me his modern time contact (GSM – which then used to be analogue while we were together) when I found out that he was running a church in Akwa Ibom.  It takes an exceptionally good boss to have his former staff remain in search for him after such very long time. It also takes a good subordinate to be easily remembered by his former boss of long time at just a Whatsapp message.

My first whatsapp message to the man we parted ways over two decades ago was replied exactly the way he would physically do while he was my boss in Norman. Mr. Eno was a GGM that loved to see junior staff free with him. He got upset with one that came shaking. I remember our Chief Security Officer, a retired CSP (name withheld here), who would see the GGM coming on the staircase and would rushed to one side shaking. Oga deserves the ranking that he has just gotten in by the Governor and good people of Akwa Ibom State.  His humility as a company leader is beyond a thing to discuss in newspaper article so as not to be accused of patronizing. But if I cannot patronize such a wonderful leader of man, what else can I do to prove to my Lord in heaven that I appreciated those that had offered good leadership on the surface of the earth?  A very fantastic man that, like my Group Executive Vice Chairman, laid the foundation for what I became today because they both agreed that while I worked, I was not required to resign to proceed to institution of higher learning. He called me by my first name and still does, even when we met in Abuja on Monday June 7, 2022 he particularly did. Pastor Umo Bassey Eno, as he was endorsed for Governor 2023, by Akwa Ibom National Assembly Caucus.

As destiny would support what was done, today, Pastor Umo Bassey Eno – the man we knew as Oyinbo but we had no such audacity to call our GGM ‘Oyinbo’ until now that, as a Journalist, I can call people anything but disrespect – is Akwa Ibom State Governorship Candidate on the platform of Peoples Democratic Party (PDP) for the 2023 governorship election. To this end, coupled with the support he has across the establishment in the well endowed and peaceful oil producing state part of South South Nigeria, he becomes the man to beat as general elections ride to a start in eight months time from now.

Wishing my boss the best of luck!