“What exactly therefore are we trying to let the world know about Ibrahim Gambari? We need to end this and go to the next level. We cannot afford to join wailers and dangerous opposition in creating controversies all the times to confuse the government that we vehemently decided and chose for ourselves just because of a past that we cannot really confirm as faulty.”

Whereas over 177 countries in the world have had no other priories today outside the need for permanent or effective solution to the coronavirus pandemic that is killing their respective citizens in thousands daily and infecting them in multitude of scores of thousands, some Nigerians’ main focus is to either debunk the claim of existence of the epidemic or find another “irrelevant” controversy to distract the effort of government to help stop it from getting to expressway so fatality does not grow to what the world first witnessed in China, overtaken by Italy and Spain and now the once upon a time ‘super America’ is champion of.

This thing was first reported by China to the World Health Organization (WHO) end of December 2019. Meaning that America and the rest of the world became aware of it that time. But because US President Donald Trump wanted the world to be silent on it, the Almighty megaphones of Nigeria – NGOs and the rest kept mum. America did not just keep mum, Trump either trivialised it or claimed it did not exist yet practically enjoyed that they were Chinese Wuhan citizens it was killing.

The moment in February China got over it and it was already having high fatality in America and Europe, it was time for the megaphones of Nigeria to begin scream producing videos and audios which they launched across social media and requested people to share and trend. I checked to know in which other African countries similar megaphones working for America reside, I found no one. I stand to be corrected. Ours of Nigeria must scream now because their referee in Trump had blown the whistle for the race to kick off. Then we had all sorts of anti-5G, fake Wuhan-originated virus theory and all the anti-China propaganda music going on MAINLY in Nigeria!

That they did to distract the Muhammadu Buhari government, for the simple reason that President Buhari freed us as a nation from the dollar-grip of America and has made Nigeria have a currency pact to make Nigeria’s importers of technology, particularly the ICT, access their buying directly from the singular producer of that technology – China- at direct exchange of Naira for Yuan (N54) as against indirect access – America – in exchange of Naira first for dollar and then for Yuan. If America dies not produce these things we need but China and they exist in Chinese markets only, why do we pay in dollar (N360) to sell locally at very highly inflated prices when we can actually pay in Yuan (N54) to crash local prices for the convenence of our people? Buhari asked this question, answered the question and acted the solution by taking us to China. This was where Nigeria went wrong in the “court” of America and this is the offence of Nigeria’s President Buhari, after 2019 election Trump attempted to truncate failed, that its foreign aids beneficiaries in the country wanted to disrupt his government for, using all sorts of controversies.

All of a sudden, we are just being told that Chinese eat lizard. We knew long ago. We are told Chinese companies in Nigeria work in the interest of their country. But they have not answered us on why Coca-Cola money does not sleep in Nigeria if the America’s company does not work in the interest of its country. It thus makes me conclude that whereas Africa may rule the world in time to come, it may not have Nigeria as leading light of the era considering the negative mindedness of its citizens. That is to say that if Madagascar were to be Nigeria, Covid19 cure it discovered and is now getting continental support and patronage would not happen. Why then do we scream over the need for Nigeria-made vaccine? We need to change our attitude if we really want to progress.

They then came with controversy of Professor Ibrahim Gambari having, sometimes in the past, said, “Why I defended Saro-Wiwa killing”. They probably are thinking this will make President Buhari rethink his decision of him as Chief of Staff to the President of Nigeria. This was coming after they had attempted to wail the President to make him appoint somebody from a section of the country but which failed. The wailing was that President Buhari was going to appoint certain Babagana Kingibe but, the Buhari I know would always surprise such charlatans. He went through the backdoor and resurfaced again but with a deep blow in their faces. His new Chief of Staff is Professor Ibrahim Gambari.

They were dazed. They admitted defeat but it was only temporary. They sent their media allies to him to know if he would serve as “President” of Nigeria. Gambari, a former diplomat, hit them hard: I will serve and report to President Muhammadu Buhari and not to report to the public. Another one from a television station came with another question considered to be mischievous but, I gathered, the Chief of Staff schooled asker to grow and learn how to ask questions. Many people were good with that. I am not far from being good as well.

Now they brought his past comment about Mr. Ken Saro-Wiwa’s killing and I made my swift interventionist comment. I said to them, who want us to be upright in our dealings because of future, that you are right about why we should be upright in our dealings to avoid our past coming to haunt us in the present. But that I will advise us to please let the sleeping dog lie because, you cannot come in the time of “democracy” which meaning we now know to be wholly hypocrisy and use it to judge what we all had no option to as military era. 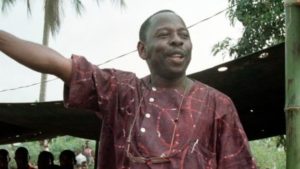 I have one of the top Buhari’s aide today, very high ranking aide, who fought the same regime that killed Saro-Wiwa and who has been reading my articles in support of some of the things the military did. It is still being our attitude in parts of Nigeria that we just criticise or witch-hunt the present over supposed sin of the past just because we want to be what? Kindly note something today, whenever you see that wailers have chosen something as a topic and are trending on it, refrain from taking part if you cannot stop them.

The wailers, who already acknowledged their defeat over the attempt to wail President Buhari to appointing a man from a section of the country but failed, have suddenly woken up with the past of Ibrahim Gambari. It should not be you and I that are found taking part in it because it doesn’t help. It neither helps nor profits.

If you want to know why Saro-Wiwa was killed, go and ask General Tajudeen Olanrewaju to tell you and also educate you on his own personal role to stop his killing as Abacha’s top trusted officer. What happened to Ken Saro-Wiwa was not a distant history thing. We were not too much kids then. That was between 1993-1994 the early days of Abacha. What Saro-Wiwa did was not different from what Omoyele Sowore did when we all united that he committed treason. Talkless that today, people of Niger Delta have eventually come to that reality. Was it Abacha that impoverished the people? Over decades have we not started seeing that not all Federal Governments have successively been blameable for that problem but governments of respective states of that geopolitical zone? In order to expand their benefits, the same Abacha gave two more states to the Niger Delta: Akwa Ibom and Bayelsa.

What exactly therefore are we trying to let the world know about Ibrahim Gambari? We need to end this and go to the next level. We cannot afford to join wailers and dangerous opposition in creating controversies all the times to confuse the government that we vehemently decided and chose for ourselves just because of a past that we cannot really confirm as faulty.