Raphael Bruno, a writer with 108 books to his credit, has just launched a new book to make his 109th that he has written.

The writer, who got in touch with The DEFENDER via WhatsApp message from his base in Brazil Saturday morning, said he’s been aware of the Nigeria-based journalism processing company through social networks even as he looks forward to cordial relationship between the organisation and himself. 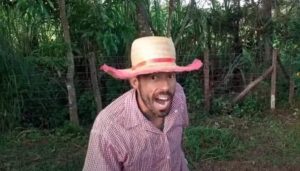 The writer Raphael Bruno, who is also an actor, poet, journalist, composer with more than 200 songs, humorist and among other attributions, launched the e-book, Vida de Jeca, which, according to him, also takes care of all immigrant languages of Brazil because, aside Brazilian that is the major and national language of the country, he wrote in Spanish, English, German, Italian and others.

“I wrote in Spanish, inglish, german, italian, portugues, japonese and catalan,” he messaged The DEFENDER.

The author of Penedo, in the South of Rio de Janeiro, has already sold his works in France, Germany, USA, England, India, Japan, Australia, Spain and throughout the country.

He won the award for best comedian at the Andrelândia Community Radio Festival.

His first literary work was with the book Musicas e Poesias, in 2016. In the following year, he created his humor channel that bears his name by joining followers from all over the country.

With great skill in writing, he created several anecdotes.

In 2014 and 2015 it had its program on local radio, with the name of Coração pra Coração (success in the city). In 2018 he was a commentator for the radio Frenética Web.

This year he was a commentator for Rádio Capital 777 and currently works as a reporter for Rádio Tropical AM, in the program Falando Geral. His first radio appearance was in 2003 in the extinct Chacrinha da Real telling a joke.

With such creativity, Raphael decided to put his ideas into practice and he never stopped.

His works are found on Amazon, Perse, Saraiva, Livrorama and Clube dos Autores.