The Sultan of Sokoto, Alhaji Muhammad Sa’ad Abubakar, in a strong word, advised stakeholders involved in academic business in Nigeria that there should be no circumstances where embarking on strike should be an option again.

Sultan Abubakar, who was speaking as Chancellor of Nigeria’s premier university, the University of Ibadan in Ibadan, on Thursday November 17, 2022, attributed the low turnout and lack of adequate preparation for the 74th Foundation Day and Convocation Ceremony of the university to the strike by Academic Staff Union of Universities (ASUU). 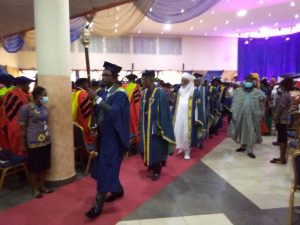 He bemoaned that the ASUU strike affected this year’s ceremonies to the extent of no provision for honourary doctorate degrees that are usually done in recognition of distinguished contributors of progress to the nation, especially in the area of education.

The UI Chancellor, who thanked God that the ASUU’s strike was now over, disagreed with people who talk and present Nigerian university system like it is the worst situation in the world, adding that there must be ways of resolving issues in the academic sector without any union of staff resorting to strike. 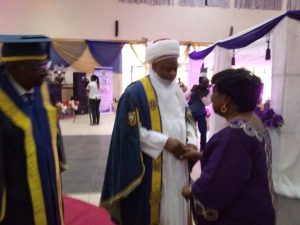 Sultan of Sokoto and Chancellor, University of Ibadan, personally acknowledging the 96-year-old Old student of the university, Prof. Adetoun Ogunseye, during the 74th Founder’s Day and Convocation of University of Ibadan, in Ibadan, Oyo State, on Thursday November 17, 2022. PHOTOS: Defender Media Limited.

He said, “No, ours is not the worst situation. If it is, how come products of Nigerian universities go abroad and are doing well there?”

They are doing well abroad, the Sultan said, because the universities in Nigeria are doing great but advised that “We must be able resolve our problems without going on strike.”

President Muhammadu Buhari, who is the Visitor of the university, noted that his government’s commitment to education development remains unshaken, despite the untold hardship the nation particularly its education sector witnessed due to global problem of COVID-19.

He commended the University of Ibadan for its great contribution to academic excellence and particularly acknowledged the contribution of the Sultan of Sokoto Alhaji Muhammad Sa’ad Abubakar, whose time as Chancellor he said has seen the university grow from strength to strength.

Particular announcement of a 1948 admitted student, who is now 96 years old, Prof. Adetoun Ogunseye, drew the interest of the Sultan Abubakar, who quickly walked down from his high seat to personally acknowledge the presence of the old student of the university he leads as Chancellor.