Amidst imbroglio over probe of corruption in the Niger Delta Development Commission (NDDC), a eyewitness account has come up with pictorial evidence that shows one of the contracts Senator Peter Nwaoboshi was awarded but failed to execute. 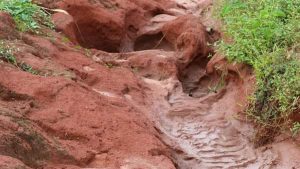 The eyewitness, named Christopher Orji, is from Ubulu-Uku, a Delta State community, whose mother, he said, can no longer step out of her home because of the bad road awarded to a Nigerian Senator but has been left undone.

Asked how, he told the story of what happened and backed it up with evidence.

Explaining the pictures he said, “This is Ubulu-Uku-Onicha-Ugbo Road. The contract was awarded to Senator Peter Nwoboshi, who came with workers and two grading Machines, November 2019.

“He promised to continue the work after Christmas and New Year, but has abondoned the road project. We later discovered that he did that to deceive ICPC officials who came for investigation.

“He is boasting that we don’t have any document to nail him, but if he was Nat awarded the contract, why did he come with workers to Ubulu-Uku, is he our LGA Chairman?”

Orji made this submission and called on those that have access to power in Abuja to kindly tell their story saying “We are suffering here, please, we need your intervention.”

The DEFENDER could not get the Director of Public Affairs of Niger Delta Development Commission (NDDC), Mr. Charles Odili, to identify this said project as at the time of filing this report on Saturday.

However, Odidi had at a recent press conference in Port Harcourt disclosed 11 business names that Senator Nwaoboshi used either directly or by proxy to take contracts from the Commission.

It will be recalled Nwaoboshi threatened President Muhammadu Buhari’s digital and social media aide, Lauretta Onochie, for asking him to answer pending questions bothering on the 11 business names listed against his name by NDDC. He also threatened NDDC’s Odili for disclosing the list. 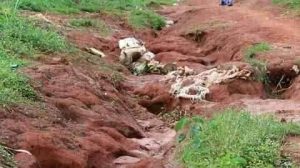 Our findings had shown that the senator is one of many lawmakers who were awarded the interventionist agency’s people-based contracts but who not only failed to execute the contracts but also pocketed the money.

A source told us that it was as a result of this corruption in which he, like other of his colleagues in the National Assembly, is neck-deep that the accused lawmakers decided to probe the NDDC corruption by themselves, thereby being a judge in their own own case.

They were doing that to frustrate the Forensic Audit ordered by President Buhari, supervised by Minister of the Niger Delta Affairs, Senator Godswill Akpabio, and overseen by the Professor Pondei-led Interim Management Committee (IMC) for the clean up of the Commission.