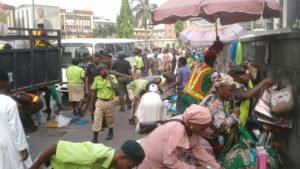 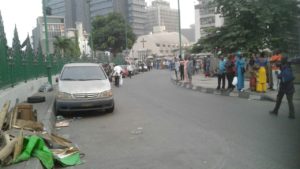 In line with the decision of Lagos State Government to protect the monumental arcades from environmental pollution caused by street traders, hawkers and other nuisance, the Lagos State Task Force led by its Chairman, Mr. Olayinka Egbeyemi, at the weekend, swung into action dislodging all blockages around the Tinubu Square now known as Tinubu Monumental Arcade in Lagos Island Local Government Area of the state.

According to a statement signed and copied to The DEFENDER by the Lagos State Task Force Head of Public Affairs Unit, Mr. Adebayo Taofiq, the government’s decision was said to have been informed by the need to protect the ‘Monumental Arcades’ primarily meant to preserve the state’s cultural heritage and serve as achieves for academic research, relaxation and named after heroes of this country.

The ‘Tinubu Monumental Arcade’, for instance, which was re-constructed by the present administration, and named after Madam Efunroje Tinubu (1810 – 1887), a female aristocrat and trader of the pre-colonial and during colonial era in Nigeria, The DEFENDER gathered, had been abused with environmental nuisances particularly street traders and hawkers, who by extension, were already blocking the road setbacks and walkways constructed around the arcade.

In order to reclaim it for its original purpose, operatives of the Lagos State Task Force led by the Chairman Olayinka Egbeyemi, accompanied by officers and men of the Kick Against Indiscipline (KAI), moved into action clearing the area by sending the street traders and hawkers packing.

Clearing the Tinubu Monumental Arcade in Lagos Island Local Government Area of unwanted elements, Chairman of the Task Force, Mr. Olayinka Egbeyemi, a Superintendent of Police (SP), disclosed to newsmen that environmental nuisances particularly street trading and hawking around Tinubu Square and other monumental arcades provided by the government was worrisome.

Speaking further, SP Egbeyemi said the agency, under his leadership, would strictly enforce the Lagos State Environmental Sanitation Laws on any arrested street trader or hawker causing environmental nuisance besides and around monumental arcade in the state.

The police officer enjoined market leaders across Lagos State to warn traders and hawkers to immediately stop displaying and selling wares besides and around monumental arcades provided by the government.

Egbeyemi however advised traders not to extend their trading activities beyond areas earmarked or marked by the government as anyone arrested selling on road setbacks and walkways, he added, would be charged to environmental court and with his wares confiscated.

In the meanwhile, the Lagos State Environmental Sanitation and Special Offences Unit (Task Force) has been relocated from Ikeja to Multi-purpose Agency complex, Bolade Oshodi opposite the Arena complex.

According to the state government, the relocation which equally affected some other government agencies was meant to strengthen their operations.

To smooten the operations of the relocated agencies the government provided them with social amenities such as electricity, standard food canteen, gymnastic, fire station and other needs.