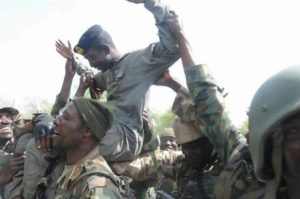 *Abu Ali celebrated by soldiers after one of the battles he led. 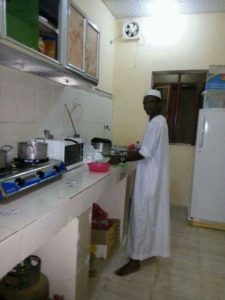 *Also assisted in the kitchen. 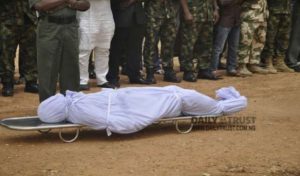 *Wife of the the late war hero and one of her kids (right). On the left are caskets bearing the rest of the soldiers that also fell at the front. 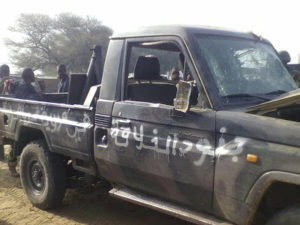 *One of the items recovered in troops’ counter attack on Boko Haram insurgents a few days after Lt. Col. Abu Ali fell in ambush. 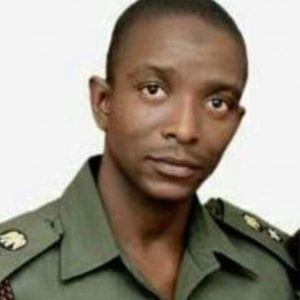 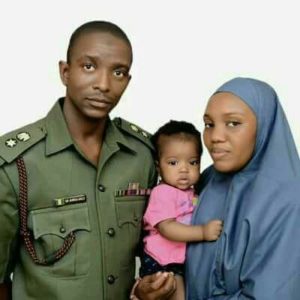 *Abu Ali, wife and a kid: Only death has split them apart temporarily till they will reunion in heaven, Insha Allah – Mourner expressed. 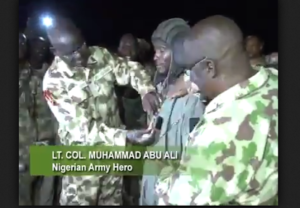 *Hardwork appreciated: Abu Ali’s contributions appreciated, rewarded in his life and will be more appreciated in death. Photo shows Chief of Army Staff Lt. Gen. Tukur Yusuf Buratai, presenting him an award of excellence before his death. 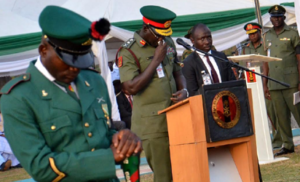 Hardly has a story of bravery evoked such passion in recent times among Nigerians as is being told of Late Lt. Col. Muhammed Abu Ali who died in confrontation with insurgents in the theatre of war against Boko Haram in the North Eastern part of Nigeria.

Muhammed Abu Ali was born on the 15th of August, 1980 in Lagos State. With parents hailing from Kogi State, he attended Army Children’s School in Maiduguri and later on joined Command Secondary School, Jos. He joined the Nigeria Defence Academy in 1998 and became a commissioned officer in 2003.

On the 25th of January, 2008, he and his heart throb whom he met in Kaduna got married and were blessed with three children, Fatima, Amir and Yasmin.

Popularly called “Slim” by his friends and “Sarkin Yaki” by fellow combatants, Abu Ali was known as a human terror to terrorists for his daring campaigns as Commander of the 272 Task Force Battalion. He fought for the glory of nation and was unshakable in his steely resolve to retain the territorial integrity of Nigeria, a price that came with the sacrifice of his life in the line of duty.

A patriot per excellence and an unyielding force to enemies of our nationhood, Lt. Col Muhammed Abu Ali was not one to shy from battle. Under very difficult circumstances, he and his men successfully recovered scores of towns from insurgents.

Before he and four others fell in combat from an ambush, he had been decorated for his gallantry by the Nigerian Chief of Army Staff, Lieutenant General Tukur Yusuf Buratai, who decorated him as a Lieutenant Colonel in September 2015, shortly after he was promoted a Major. He was also Recipient of the Chief of Army Staff Award for Bravery and Excellence. In a statement by the Army Authorities, the fallen hero was said to “serve the nation with unwavering commitment and dedication, paying the ultimate price so that millions can sleep on their beds in peace.”

From the frontlines, it is reported that he was instrumental to the military campaign that won back Baga from the stranglehold of Boko Haram. From soldiers in the frontline, we learn that he initially started his brave conquests from Yola, in Adamawa State from where he was moved to Borno. He and his battalion later moved to recover Monguno and later to Konduga – dreaded no-go areas of battle.

Through Yale, he and his battalion were again instrumental to the recovery of Bama, Pulka and eventually Gwoza back to control of the Nigerian forces. The stories of uncommon courage that trail his achievements on his military assignments are unending. He was reputed as telling his men to load him up with 95% of the duties of engagement. He was a dutiful officer and will be missed by millions of Nigerians who today have come into new realisation of the challenges of the war front.

Described by Course-mates as an irreplaceable asset that Nigeria will miss, Lt. Colonel Muhammed Abu Ali was a towering source of inspiration and will now serve as a rallying point for a united re-assessment of the support that our men and officers require for success. His will also be a painful loss of friendship.

Buratai weeps at graveside in of fallen soldiers

The Chief of Army of Staff, Lt.-Gen. Tukur Buratai, wept on Monday as he read the funeral oration at the graveside of the seven military men killed by the Boko Haram terrorists. They are: late Lt.-Col. Muhammad Abu-Ali, Seargents Muazu Ibrahim, Bassey Okon, Hussani Jafaru, Cpl. Chukwu Simon, Private Salisu Lawal and Seaman Patrick Paul. They died when the terrorists attempted to seize Mallam Fatori on Nov. 4 in an attack. The soldiers were inducted into the Operation Lafiya Dole in 2014, designed to fight the Boko Haram insurgents and liberate the North-East from their hold. “They were brave, precise, professional and inspiring. They led the battle to recapture the following towns: Monguno, Baga, new Marte, Bama, Gwoza, Banki Junction, Gamboru-Ngala, Yale, Yanteke, Bita, Deruwa, Daira Kangaruwa and Mallam Fatori,” Buratai said.

Deaths inspire the living to fight on

Troops at the warfront have not been deterred by the ambush of Late Lt. Col. Muhammed Abu Ali and six other soldiers as the war against Boko Haram launched a counter attack on insurgence a few days after their deaths.

This came as the Nigerian Army said on Tuesday that troops of 119 Task Force Battalion, 8 Division Nigerian Army, deployed at Kangarwa, Kukawa Local Government Area of Northern Borno State, had neutralised 13 Boko Haram terrorists in a counter attack carried out by the troops.

The Acting Director, Army Public Relations, Colonel Sani Kukasheka Usman, who disclosed this in a statement, said one soldier was killed while three other soldiers were wounded but that 13 insurgents were wiped out in the counter attack carried out by the troops.

He said the troops also recovered heavy weapons from the insurgents.

The offensive was coming a few days after the insurgents killed Lt. Col. Muhammad Abu Ali, Nigeria’s war hero,  and six other soldiers at Mallam Fatori in Borno.

“Unfortunately, one soldier paid the supreme price during the encounter, while three soldiers were wounded in action.‎

“The offensive which began at about 4.00 pm and lasted for roughly four hours, necessitated the troops calling for air support to which the Nigerian Air Force (NAF) promptly responded by dispatching an Intelligence Surveillance and reconnaissance (ISR) aircraft and a Ground Attack Fighter Aircraft in support of the ground offensive.

“The fierce counter also saw some insurgents fleeing with gunshot wounds and abandoning logistics and weapons.

*Abu Ali, wife and a kid: Only death has split them apart temporarily till they will reunion in heaven, Insha Allah – Mourner expressed.