My brother sent me an audio-visual via WhatsApp and expressed this fear: “Brother, listen to this. What’s going on now in the country? People looking for ways to distabilize this country? What’s to be done? All these are alarming.” He said in his accompanying comment urging the authorities in the country to begin to take action against makers of social media contents injurious to the peace and peaceful co-existence among the people of Nigeria. 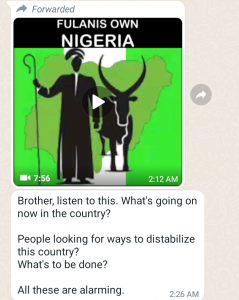 And, like a medical doctor confident of his mastery of treatment for an ailment that has caused panic in the spine of the sick, I laughed out the content of the audio-visual because I knew it was just one of the many efforts of the evil merchants, who must set Nigeria on fire at all cost even after failing in their prophesies of doom. And then, I made my submission….

Thank you for letting me know about this audio-visual. First, it is equally the same type of heavy propaganda. Those behind secessionist project will do anything to achieve their aim at all cost since constitutionally and revolutionally they have failed to achieve their aim.

Like God expose the video about “Buhari Estate” where they claimed Fulani stockpiled arms to launch attacks Nigerians, which had sought to criminalise Fulani race and incite ethnic war against them in the South West like Nnamdi Kanu did with his fake news in the South East, we will forward this to appropriate authorities and they know what to do about it.

The point is, they could have been doing this when I had not trained to detect fakeness in video and audio contents. There is nothing anyone can do of video and audio and push on the internet that God has not given me the intellectuality to discriminate among in order to know whether it is truth or fake.

Sir, for obvious reasons, there are naked lies in the audio-visual above. If anybody is saying that Fulani are yet to be known in 100 years, he himself is a devil incarnate that must be nailed to the cross. Each time they do or say things of this nature about Fulani, what I use and I want you to use to neutralise their lies is to ask yourself, “Are these Fulani human beings or ghosts?” Once you are convinced they are human beings like you, then be rest assured that their fruit cannot fall far from its tree any time any day. Meaning, their behaviour cannot be far from your behaviour except slightly culturally and that is God.

For a very long time, they have been engaged in this propaganda. They only build on it when a Fulani man emerged President in 2015. It shows that the grouse of these elements is not to see Fulani as President of Nigeria except that they will go to any length to sabotage his government to give the head of government and his tribe a bad name in order to kill them. If we were not grown during Shagari, we are here in President Muhammadu Buhari era and we have seen who the evil ones truly are.

They tried unsuccessfully to make us see Fulani as number enemy of Nigeria. We would have for a moment taken them seriously but their hanky-panky was to quickly expose them when we know they used to call the enemies Hausa only for them to now change when they know that they have failed. They believe they have succeeded in convincing the Southerners in holding this erroneous and satanic belief. They now go to the midst of the North and propagate a separatist idea setting Hausa against the Fulani. This they do by, in their own thinking, trying to open the eyes of Hausa people of the North to seeing themselves as different from the Fulani people of the North and, to an extent, they achieve this (hence the starting point for the Zamfara banditry problem) and I can tell you, these Fulani people are an endangered species in Northern Nigeria today because of the likes of evil audio-visual propaganda like you sent above.

Sadly, this is what the encroachment of Christian Association of Nigeria (CAN) is doing in the North and the likes of a Bishop Matthew Kukah are involved in it.

The plain lies:
1. Any video or video or article or book that must go out and expects to be taken seriously as truth must have a verifiable source and originator or producer or author. Where is that in this audio-visual? It is inexistent. It makes this yet another work of them a complete ruse.
2. How come this type of claims did not come until now that election is around the corner and we are quite aware the lobby of international conspiracy theorists to come under any little national challenge of Nigeria to seek their collapse of the country that they failed to achieve at 100 years of amalgamation?
3. Why are they using a name linked to Sokoto forgetting that there can be be no one that is more Sokoto than the Sultan of Sokoto, who is leader of Fulani race in Africa and has always been the only unifying factor preaching and seeking peace, unity and development of and in Nigeria and among people of various ethnic and religious backgrounds in the country?

4. This audio-visual is simply an extension of such propaganda that said Sokoto people called themselves “Born to Rule” and this sitting Sultan challenger them to come out and tell where the Sokoto people come to say such a thing either by way of history or politics or anything and they simply failed with all the accompanying shames to prove their claim against the Sokoto people. Does it make sense to say Sokoto people call themselves “Born to Rule” and there is no evidence to that effect? They even pointed us to their plate number and what does it say? “Seat of the Caliphate”, and it is proudly so. Any other such print would not stand and so the truth has overcome their lies.

If not, what is the truth in their claim of conversion of people in the South to Islam by Fulani people? That tells you this audio-visual is by Southern designers of the evil trying to set Southern Muslims against their North brothers. Then what do we claim about Northern Hausa-Fulani people that got converted to Christianity? People have come across Islam globally; in USA, UK, France, Germany, Russia, India, China and they have voluntarily concerted to Islam. No qualms. How come it is only in Nigeria that such will be blamed on Fulani people?

The warning is that, these people have seen Afghanistan war, they have seen the South Sudan war, they, currently, have seen the war in Ukraine with all the failures of the same West that they are working for to destroy their own country Nigeria but they fail too to learn to come back to their senses and be in peace with themselves and their neighbours within the nation’s community. After the Civil War of 1967-1970, do they have the liver to go through another civil war? The likes of audio-visual like this is proof they learn no lesson and some of us would not open our eyes and watch them did the pit for ground swallow that, when it happens, will not affect them alone but all of us.

In conclusion, this, like I said, will be sent to the appropriate authorities for action because we as a country cannot continue to tolerate evil audio or video of this nature in time when we are working assiduously to end insecurity in the land. We have seen what they try to do with Owo Church attack. They have been feigning the theory of Fulani involvement but fail. Things South East governments and political elites did that render them to irrelevance. It should not be at this time that the dream of South, particularly South West to have power shifted to them and that has been achieved with the help of the North that Southerners are doing this using evil to pay back the goodness of the North towards them. If you are doing this after getting ruling party’s presidential ticket, you must have done worst if you did not get the ticket. God dies not support evil doing hypocrites.