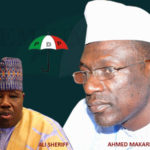 The Court of Appeal in Abuja has adjourned sine-die (indefinitely), further proceeding on the crisis rocking the Peoples Democratic Party, PDP, in Ondo State.

In a ruling on Friday, a three-man Special Panel of the appellate court led by Justice Ibrahim Salauwa, announced their decision to hands-off dispute over who should be the flag-bearer of the PDP in the Ondo State governorship election billed for November 26.

A source in Akure who spoke to The DEFENDER on phone, under condition of anonymity, said by implication, Mr. Jimoh Ibrahim stood on as candidate of the party in the state.

The panel, which had earlier reserved its judgment on an appeal lodged before the appellate court by one of the contenders for the PDP ticket, Mr. Eyitayo Jegede, SAN, based its decision on a motion from the Supreme Court.

“Only yesterday, at about 7pm, we were served a motion in suit No CA/A/551b/2016, which was filed in the Supreme Court on November 17”, Justice Saulawa stated.

He said the motion which was filed by six chieftains of the PDP in South West, led by Chairman of the party in Ondo State, Prince Biyi Poroye, among other things, prayed the apex court to invoke its disciplinary powers against the appellate court panel.

The Poroye led group, who are Respondents in Jegede’s appeal, further prayed the apex court not only to set aside proceedings of the appellate court, but also to restrain the special panel from further adjudicating on the dispute.

Besides, the Respondents, who are appellants before the Supreme Court, equally applied for an order disqualifying/recusing all members of the special panel on the ground that they betrayed there Oath of Office by their refusal to be bound by laid down judicial principle of staris-decisis.

Poroye and the other Respondents contended that the panel had in a ruling it delivered on November 16, okayed Jegede’s appeal, despite being aware that the Supreme Court was already seized of the facts in dispute.

They had through their lawyer, Mr. Beluolisa Nwufor, SAN, vehemently opposed decision of the panel to hear Jegede’s appeal. Nwufor, SAN, insisted that hearing the appeal would amount to the panel engaging in an act of “judicial rascality” since the matter was already before the apex court.

He argued that in line with the legal principle of lis-pendis, the appellate court ought to hands-off the case to avoid a situation where it would conduct a parallel proceeding with the Supreme Court on the same subject matter.

“In view of the unchallenged facts brought to the notice of this court that an appeal against the ruling granting leave to the appellant to appeal the high court judgment, which this court made on November 10, is already before the Supreme Court and has been entered.

“It is therefore our position that this court has lost its jurisdiction to continue with this matter. By order 5 Rule 11 of the Supreme Court Rules 1985, as amended, the Supreme Court is now seized of the whole of this proceeding as between the parties herein.

“It is also an undisputed fact that a motion on notice for staying of all further proceedings and further hearing in this appeal is pending at the Supreme Court and has been drawn to the notice of this court. “We thus maintain that this panel cannot entertain further proceedings until that motion is decided by the apex court, one way or the other.

“I submit that this court should not conduct parallel proceeding with the Supreme Court regarding the same case, but should allow the apex court, in line with the dictates of the hierarchy of courts established by the constitution, which places the Supreme Court above this court, to take a decision regarding the pending motion for stay of proceedings already before it.

However, the panel rejected his submission, even as it gave Jegede’s lead counsel, Chief Wole Olanipekun, SAN, the nod to adopt his processes in the appeal.

Olanipekun had urged the court to ignore Nwufor’s submissions which he said lacked merit and substance. He maintained that the appellate court had a constitutional responsibility to do justice in the case, saying the court would be abdicating its duties should it allow itself to be stampeded into handing-off the matter.

Meanwhile, announcing the withdrawal of the panel from the matter on Friday, Justice Salauwa, said they took into account, “all the circumstances surrounding the case”, as well as “mischievous processes” filed by the Respondents.

He noted that a previous panel of the court equally disqualified itself from handling the matter following allegation by the same Respondents that it collected N350million bribe to deliver judgment in Jegede’s favour.

“This panel was put in place as a rescue mission after the previous panel headed by Justice Jumai Hannatu-Sankey, revised themselves following mischievous allegations by the Respondents.

“We have come this far and having had a number of considerations and circumstances surrounding politically motivated allegation against us.

“We have decided that enough is enough. It is now time for us to do what is most reasonable and needful, that is, to await the outcome of the Supreme Court on all the issues.

“For us to continue, especially in view of the unfortunate development will be contrary to the voice of wisdom and voice of courage.

“It is our view that we have to await the outcome of the decision of the Supreme Court.

“We have been guided by the Supreme Court decision in Agumagu vs NJC to arrive at the decision. It is left for the apex court to decide whether or not we are right or otherwise.

“We hereby rule that the instant appeal and other sister appeals slated today for ruling, stand adjourned sine-die to await outcome of decision of the Supreme Court”, Justice Salauwa stated.

More so, The DEFENDER learnt that the Respondents have also lodged a petition against members of the panel before the National Judicial Council, NJC. Aside Justice Saulawa, other members of the panel are Justices Igwe Aguba and George Mbaba. Jegede had approached the appellate court to challenge the judgment of June 29 judgment of Justice Okon Abang of the Federal High Court in Abuja, which directed the Independent National Electoral Commission to only relate with the Ali Modu-Sheriff faction of the PDP.

Justice Abang, on October 14, also re-affirmed the verdict, even as he warned the electoral body against accepting candidate nominated by the Senator Ahmed Markafi-led National Caretaker Committee of the PDP.

Acting on the strength of the high court order, INEC, promptly removed Jegede’s name from the list of candidates for the Ondo gubernatorial poll, and replaced it with Mr. Jimoh Ibrahim. It will be recalled that whereas Jegede emerged from primary election that was sanctioned by the Markarfi-led NWC of the PDP, Ibrahim on the other hand, secured his ticket from the Modu-Sheriff faction of the party.