Facts have emerged on what a victim described as numerous corrupt activities allegedly going on in the Federal Airport Authority of Nigeria (FAAN) to defruad and infringe huge discomfort on unsuspecting members of the public with little or no regard to the nation’s economic situation.

According to the act which established FAAN as a government agency, “FAAN is a service organization statutorily charged to manage all Commercial Airports in Nigeria and provide service to both passenger and cargo airlines.

“Generally, to create conditions for the development in the most economic and efficient manner of air transport and the services connected with it.”

While it is also expected that FAAN will create enabling atmosphere for members of the public carryout lawful operations within the airport premises ROYAL NEWS however gathered that with strong connivance with a private outfit, Bashfast International Venture Ltd, FAAN refused to provide parking space for visitors to the Nnamdi Azikwe International Airport, Abuja.

In order to create undue chance of generating money for the firm under the guise of regulating traffic, some agents were positioned at different locations within the airport premises, where they will ignorantly direct a motorist to parking space and clampdown on his vehicle after one to two minutes with an imposion of N25,000 fine on their victim.

“Falling victim of this charlatans is one of the most frustrating things that can ever happen to patriotic Nigerians as you’re expected to pay amount not less than 75 percent of the proposed N30, 000 minimum wage for Nigerian workers”, an eyewitness account said.

A victim, Mr. Abdulmalik Ibrahim, who narrated his ordeal in a report published by ROYALNEWS on Friday, expressed dissatisfaction over the FG arrangement of carrying out renovation and expansion at the airport with no cognisance attention to befitting parking space thereby causing hardship to motorists.

He noted that the airport is nobody’s house and that there is need for adequate orientation and proper traffic direction for drivers.

“Imagine, what becomes of a driver, especially a first timer, who had conveyed his principal to the airport to hurriedly catch up with a flight and you quickly assist him or her to the departure terminal and before returning, your car has been clamped down upon?

“Annoyingly, you will be fined N25,000 for an offence you never committed. While many are there frustrated due to the ineffectiveness of the airport authority and lack of policy framework to legally generate money for FAAN by creating commercial parking lots where visitors or drivers can conveniently keep their vehicles at very moderate charges with timing.

“I met so many people whose cars had been clamped down upon for over seven hours, denying them access to meet up with daily engagements even with some of providing evidence of ill-health.

“Findings however revealed that the private firm was registered by a top management staff of the agency to generate money not minding the hardship on the innocent members of the public.

“We urge the Minister for Aviation, Hon. Hadi Sirika as well as the leadership of national assembly to come to the aid of innocent Nigerians who might fall victim of the illegal act with no financial capacity to secure bail.

“There is need for inter-agency collaboration within the airport premises by empowering the Federal Road Safety Commission (FRSC) who are saddled with obligations of regulating traffic to take full charge of such assignment with proper traffic signs/direction and orientation and not engaging an professional outfit in such onus task.

“Because of the sensitivity of traffic at the airport, it is advisable that professionals, especailly officials of FAAN who would not only be after witchhunting drivers but rather providing free atmosphere and not caused the nation embarrassment in the sight of foreigners who might soon fall victim of their dastardly acts.

Ibrahim however stressed that “the deal is no doubt fraudulent, self-serving, unpatriotic, condemnable and unfair to the Nigerian citizenry as the money are not adequately remitted to the appropriate authority rather , it is for private purpose.”

The DEFENDER”s independent investigation into the sllrgstions is ongoing, outcome of which will be published.

Below are documents provided by a the victim to back up his claims. 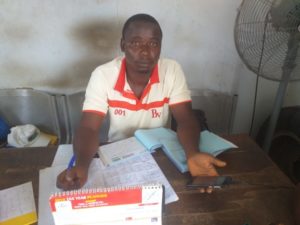 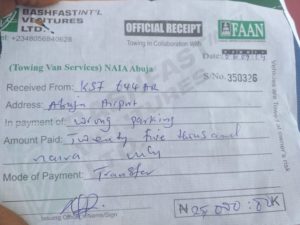 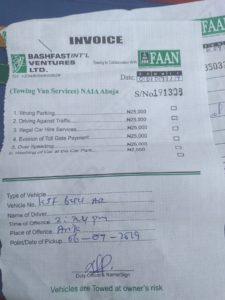