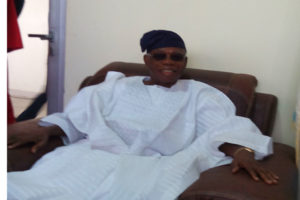 *As S. O. Babalola says he is on his first official assignment by Sultan

Sultan of Sokoto and President-General, Nigerian Supreme Council for Islamic Affairs (NSCIA), Alhaji Muhammad Sa’ad Abubakar III, has called for better treatment of the minorities in Nigeria to ensure just, equitable and peaceful society.  Speaking at the fundraising and foundation laying ceremony of the ultra-modern palace and mosque of the Attah of Ayede Ekiti, Oba Abdul-Mumini Adebayo Orisagbemi, the Sultan noted that “the strength of any group of human beings anywhere in the world is unity and not disunity” urging the Muslim Ummah in Nigeria to continue to live in unity.

The Sultan said the event was significant because “this is the first time a Muslim Oba is on the throne and on ground in this city of Muslim minority to receive and play host to the leader of the Nigerian Muslim Ummah.”

Babalola made a personal donation of N2m in support of the project .

While congratulating the Attah and the people of Ayede for the historic event, the Sultan urged them to cooperate with the Oba in ensuring that peace and harmony reign in the town.

The Sultan, who is the spiritual leader of Muslims in Nigeria, enjoined Muslims in Ayede to remain good ambassadors of Islam and as patriotic members of the community adding that they had a responsibility to take their community and Ekiti State in Nigeria to greater heights.

The Sultan said: “Since the inception of Islam, Muslims have always lived as minorities in any new environment they found themselves. It is only after they might have settled down and established themselves that, by the leave of Allah, their display of unity and positive contributions to the development of their community, they become the majority.

“At the initial stage of Islam, when Prophet Muhammad and his companions were forced to migrate from Makkah to Madinah for safety from persecution of the pagan majority in Makkah, they were in the minority.

“They were also in the minority when they established the world’s first Islamic democratic government headed by the Prophet in the city of Madinah,” he said

Earlier on arrival in Akure, the Ondo State capital, the Sultan’s deputy, Alhaji S. O. Babalola, had told the Governor of Ondo State, Olusegun Mimiko, represented his deputy, Alhaji Abdul-Azeez Oluboyo, that he was happy that he was starting his first official assignment by the Sultan on a good note of the first alphabetic letter of ‘A’ – Akure, Ayede.