*As 97 motorcycles picked from Ikorodu raids

The operatives of the Lagos State Task Force Thursday nabbed a notorious tout who impersonating himself as an official of the Agency.

The Chairman of the Lagos State Task Force SP Olayinka Egbeyemi disclosed that the notorious tout named, Mr. Abiodun Adeleye 51 years, was nabbed by the enforcement team of the Agency under the Mile 12 bridge after he had illegally arrested a Toyota Camry car for obstruction and collected N3000 cash from the owner of the vehicle. 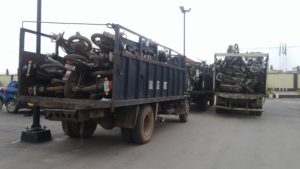 Impounded 97 commercial motorcycles between Ojota to ikorodu area loaded inside 3 trucks of the Agency.

This was disclosed in a statement issued in Lagos on Thursday by the Head, Public Affairs Unit of the Lagos State Task Force, Mr. Adebayo Taofiq, copy of which was sent to The DEFENDER.

SP Egbeyemi disclosed further that the Agency recovered a Motorola GP 340 security walkie talkie and N3000 cash he collected from the owner of the impounded Toyota Camry car with registration number MUS 319 DL.

The Chairman stated that the Agency had been inundated with complaints from motorists about illegal activities of these unscrupulous elements, saying that the ban on activities of touts and Local Government traffic officials from controlling and enforcing traffic laws across the State was a government response to clarion call to curb their nefarious activities.

SP Egbeyemi advised motorists accosted by these touts not to yield to their intimidation and demand for money irrespective of location being taken to.

“Motorists should report anybody not authorised trying to assault or extort them to the nearest Police station or any law enforcement Agency.

He advised members of the public to be vigilant about activities of these touts who are now on the increased  impersonating themselves as ‘Task Force officials’ extorting and harassing motorists on different routes across the State.

SP Egbeyemi commended Governor Akinwunmi Ambode for supporting the Agency with necessary security gadgets  including security jackets which now made officers of the Agency to be conspicuously identified while on official duties.

He however confirmed that the Lagos State Commissioner of Police CP EDGAL IMOHIMI has directed that the arrested impersonator be immediately charge to court for prosecution.

While the Commissioner of Police also directed that the Chairman Task Force SP Olayinka Egbeyemi should carry out enforcement operation on touts including traffic officials of Local Government claiming to be enforcing the Lagos State Road Traffic laws of 2012.

The owner of the illegally impounded Toyota Camry car Mr. Balogun Adebayo said, “The man (arrested tout) charged me N15000 for the traffic offence he claimed I have committed under Mile 12 bridge but I was able to raise N3000 he collected from me.”

The impersonator confessed to have collected the N3000 and that he makes an average of N15000 to N30000 daily from these illegal activities around Ketu and Mile 12 under bridge respectively.

He however appealed to the government to tamper justice with mercy that he is ready to be of a good character if pardoned.

Also, the enforcement team of the Agency impounded 97 commercial motorcycles between Ojota to Ikorodu area.

Activities of these notorious commercial motorcyclists between Ojota to Ikorodu were an eyesore as they plied major highways, bridges and harasses upcoming vehicles (one-way) with 2 to 3 passengers.

The Agency hereby warned members of the public not to engage commercial motorcyclists on 475 restricted routes including major highways and bridges across the State.